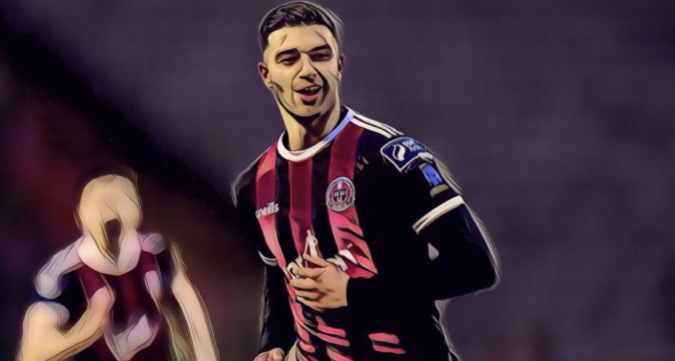 It’s been quite a weekend of action in the SSE Airtricity League, with massive games effecting both ends of the table.

The relegation battle took a massive turn as Finn Harps upset the odds in the North West Derby, whilst Shamrock Rovers fell further behind in the title race. Here’s who stood out this week…

Having seen his side grab the lead against title-chasing Shamrock Rovers, he and his teammates had to suffer a bit of an onslaught as they looked to hang onto all three points. Could do nothing about Aaron McEneff’s beautiful equaliser but thoroughly deserved his man of the match award as he kept his side in it, along with some brave defending.

Solid as a rock from the 23-year-old in for his first start. Didn’t put a foot wrong the whole game and kept possession really well. Defensively sound from the ex-Burnley man who had to deal with Saints skipper Ian Bermingham, and the fresh legs of James Doona. Just shows the quality in reserve in this side.

? WATCH | The Lilywhites 1-0 win against @stpatsfc in the @SSEAirtricityLg at Richmond Park. @John_Mountney with the goal for the champions.

Hugely impressive performance, a real leader at the back as his side kept a clean sheet in the North-West Derby. A vital clean sheet against high flying Derry City and unlucky not to get on the scoresheet himself in the first half when Raff Cretaro picked him out at the back post, but couldn’t get his header on target.

"Thats the most important one – the three points"

Man of the Match Keith Cowan speaking straight after that important win on Friday night.#LOI pic.twitter.com/BngH0q7msj

Heroic stuff at times, along with his keeper McNulty. Threw his body at everything and, even though Rovers dominated the second half, will feel hard done by that his performance didn’t lead to all three points. Superb performance.

Dan Carr shoots from 12 yards but like Randy Orton with an RKO, Dan Casey comes out of nowhere to get a block in. Tremendous. Rovers well on top now, 1-1 68'

Played left back in the three but made some outstanding challenges as Dundalk turned the screw in the second half. Got forward when possible to support Ian Bermingham. An excellent all-round performance from the big defender especially having to deal with the pace of Daniel Kelly but kept him quiet on the night.

Only took seven minutes to net on his return from a dislocated shoulder in the 1-0 win over Bahrain in the Toulon Tournament for the Republic of Ireland U-21s. His side haven’t been on a great run of late and were nervously looking over their shoulder at being dragged into the relegation dog fight after recent results, but Friday nights win will go some way to alleviating those fears. And the return of their star man will no doubt fire them up the table.

Looked the best midfielder on the pitch. Always looking for the ball at every opportunity, driving his side forward and a well-taken finish with his left from the penalty spot, was nothing more than his performance deserved.

Job done for #DundalkFC who deservedly take all three points at Richmond Park thanks to John Mountney's second half goal.#SPADUN #CmonTheTown pic.twitter.com/6qSdN3dB1D

Returned to the side from suspension with a bang, opening the scoring from the spot at the Showgrounds. Was marked throughout by Kyle Callan-McFadden but showed his quality and cleverness to find space and create danger. Skimmed the bar with a nice effort on the hour mark, but just fell short in the end as his side took a valuable point on the road, as both European hopefuls Derry City and St.Pats both suffered defeat.

Danny Mandroiu with a cool head puts Bohs ahead after Conor Levingston wins the penalty here at the showgrounds.

It says it all about the player when a pretty star-studded midfield seemed to be missing his quality. Scored a beauty after coming off the bench to grab a draw at Turners Cross and had a couple of other chances to win it. Seemed to spark his team to life going forward. Excellent player.

Top class performance from the winger. Delivered quality ball, after quality ball as the much changed Champions grabbed a vital three points away in Inchicore. Lovely low delivery to set up the opener.

REACTION | Patrick McEleney gives his thoughts on a professional win in Inchicore last night and sets his sights on this week's trip to Baku. #SPADUN #CmonTheTown

Another one to come off the bench and make a massive impact, just as Aaron McEneff did. Scored arguably the goal of the weekend with a stunning strike to grab a vital three points away at UCD and is in this week not just for the strike itself, but the importance of the goal. Even his boss eluded to the fact, the strike may just have kept him in the job!

Read Also: Is Jack Byrne worthy of a place in the Ireland team?