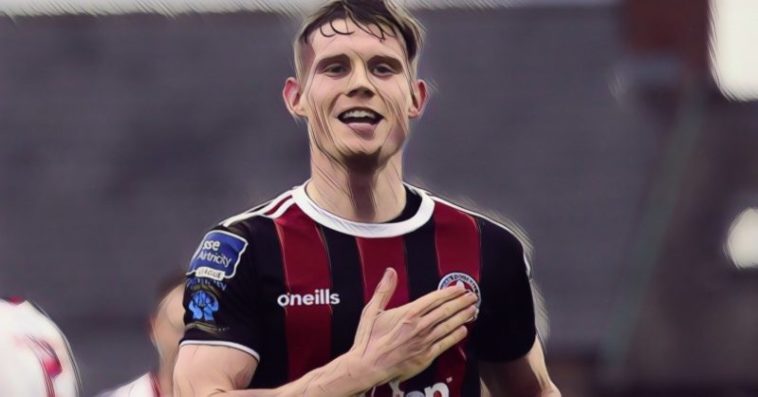 After a dramatic week of European football involving Irish clubs, focus returned to the bread and butter of the League of Ireland this weekend.

There were some big results at the top and bottom of the league and as always we’ve picked out the star performers worthy of a place in our League of Ireland Team of the Week.

The Harps stopper made one of the saves of the season to ensure his side left Waterford with a massively important three points in the battle against the drop. With his side one-nil up with just minutes remaining, Waterford’s Kenny Browne rose like a salmon to power a header on target, thinking he had equalised, only for McGinley to get a sharp hand up to push it over somehow and it was celebrated with as much gusto as a goal scored.

Can we all take a moment to appreciate how good this save was by Mark McGinley ? pic.twitter.com/Fbt63cKrZe

As Darragh Leahy slotted into centre-back, in came young Kirk who looks as if he’s been in the team years. Really strong defensive performance against one of the leagues best wing-backs in Simon Madden, and was also doubled up on a lot throughout with Dean Clarke dropping into a dangerous area. Huge talent.

Switching to right-back for Ethan Boyle, who was replaced at the break, and set up a goal in each half. The ex-Fulham man mightn’t have had much to do defensively but showed his quality when it mattered going forward

The 21-year-old showed once again why he looks to have a good career in front of him. Solid performance and not easy to keep a clean sheet at a ground where you conceded four last time out. A threat at the other end too, heading just over from Harry Ashcroft’s centre. A key man in a massive win for Ollie Horgan’s men.

A good old fashioned centre-back performance, keeping a clean sheet in the Dublin Derby at home to Pat’s. Mustn’t be easy seemingly changing centre-back partner most weeks, this time it was Darragh Leahy who slotted in with ease beside the former Aston Villa defender.

Won everything in the air as Pat’s launched set-piece after set-piece into the box and had a right old ding-dong battle with opposing number Mikey Drennan.

The attacker’s week gets even better. Starring in his sides impressive Europa League win on Thursday as a super-sub, to deservedly getting a nod to start against UCD. Justified his inclusion with a couple and when he’s in the mood very little can be done to stop the powerhouse.

Continued his excellent form against joint-bottom side UCD. Set up the opener with a tidy pass to give Graham Cummins his first of the season. Instrumental again in all that’s good about Rovers. Quality set-piece delivery led to Dan Carr getting the second and deservedly got on the scoresheet himself as the Hoops ran riot.

Absolutely immense in the middle of the park for the Gypsies. Set the tone from the off and won every second ball and tackle. Real captains performance from the stand-in skipper, who’s work often goes under the radar, but was the best player on the park, and in his 200th league appearance too.

2️⃣0️⃣0️⃣ | It was Bucko’s 200th league appearance for #Bohs today, made all the more special as he captained the side to a crucial win ?⚫️✊? pic.twitter.com/hQcScKyiXR

The 21-year-old showed nerves of steel to slot home from the penalty spot away at the RSC. As things stand, Finn Harps and UCD sit level on points, with Waterford now just seven points ahead and looking nervously over their shoulder. Relegation battle heating up big time after this massive win!

Surely a dark horse in the running for player of the year. Scored yet another vital goal, his eighth of the season, smashing the deadlock in their clash with Sligo Rovers before setting up McDonagh for the second. Deservedly received a standing ovation with the crowd chanting his name as he departed with fifteen minutes remaining.

Graham Cummins got the monkey off his back with his first for his new club in a 7-0 routing of a resurgent UCD side, in which fellow striker Aaron Greene added a brace. But this weeks nod goes to Bohs frontman Ryan Swan.

The 23-year-old bagged a double of his own in a 3-0 Dublin Derby win over St. Pat’s. Having been left out of the starting 11 against UCD on Monday, some players heads would have dropped but “Swanny” responded in the best way possible scoring either side of a Conor Levingston penalty. The youngster put in a battling performance against a very tough Saints backline, worked his socks off as usual and got his rewards.

Third goal for #Bohs and a second for Swanny. ?

Read Also: Mourinho impressed by Dundalk, Jack Byrne is Rovers’ Scholes, and the Belfield Brawl to end ’em all