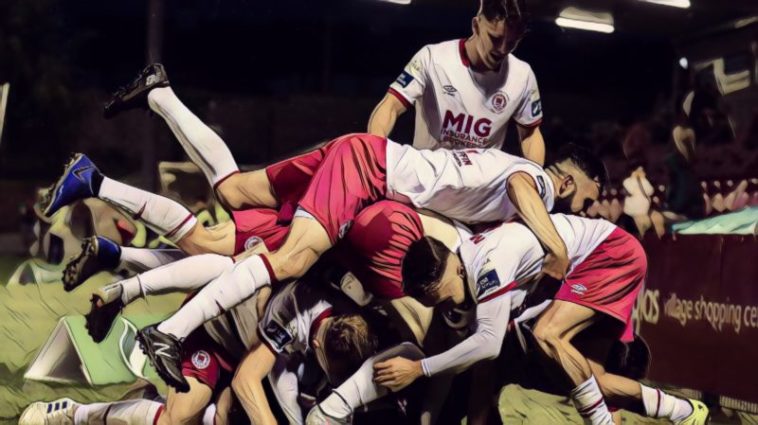 Our League of Ireland team of the week is back, featuring starring roles from players at Derry City, Finn Harps and St Patrick’s Athletic.

With two matches postponed thanks to Dundalk and Shamrock Rover’s exploits in Europe, we were left with just three matches in the SSE Airtricity Premier Division this past weekend.

There were ramifications all over the league with this week’s results, as Derry City and St Patrick’s Athletic closed the gap on Bohemians and that precious third European qualification spot.

Meanwhile, Finn Harps’ good form continues as they edged further away from bottom dwellers UCD, but Cork City have been pulled further into the relegation mire with just one win out of the last ten fixtures.

We picked out the best XI of players from around the league following the action from gameweek 28:

Brendan Clarke put in another strong showing between the sticks for the Saints, keeping a clean sheet in the process.

Scored the winning goal and a clean sheet in the one game, same as last week. You can’t argue with that output.

Wonderful strike by @harryascroft on Friday night to score his second Harps goal in as many weeks.#UTH?⚪️ pic.twitter.com/I3mhHD9at3

A man of the match performance from the defender to help secure all three points for St Pat’s away to Cork City.

Solid in defence and a threat with his crosses as well, Borg helped Harps to their second successive shutout.

Denied Cork scoring opportunities and clear chances with his good defending in a tight game.

Formed part of a dominant midfield that crushed UCD 3-1, McDonagh scoring the second himself.

Looked in his element as the Candystripes dominated the Students, pinging a 60-yard pass to McDonagh for the second goal before setting up the third as well.

What a ball by Gerardo Bruna https://t.co/ViF635fG7U

Put in a typically sold shift in midfield before coming off after 82 minutes, having done his job.

Parkhouse scored his tenth goal of the season, as well as Derry’s tenth score to come in the 80th minute or later in the league this season.

Another great win tonight 3 points and delighted to get on the scoresheet ?⚪️⚽️ pic.twitter.com/armY0MYojf

Provided the assist for the only goal of the game in a big win over Bohemians, their first defeat of the Dublin outfit in three attempts this season.

Is there a better way to make your debut than scoring a 90th-minute winner after coming off the bench? Send answers on the back of a crisp packet.

Ronan Hale with a long range effort to give the Saints the lead late in the game.

Read Also: Five of the best League of Ireland exports to the Premier League