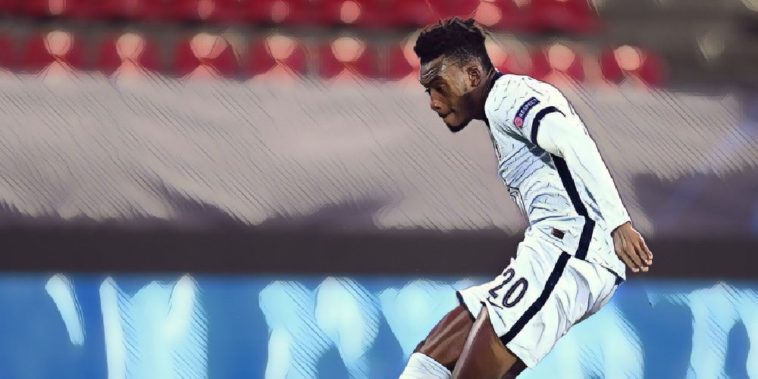 Chelsea boss Frank Lampard has insisted that Callum Hudson-Odoi is already an important player for the club after the England U21 international opened the scoring in the 2-1 win over Rennes on Tuesday night.

The Blues went into that Champions League meeting full of confidence after a terrific run of results both domestically and in Europe, with both their defensive and attacking play finally beginning to take shape.

Lampard handed a rare start to young Hudson-Odoi and that decision almost instantly paid dividends, with the wideman latching on to a terrific Mason Mount pass before firing home to put Chelsea ahead.

Despite dominating the opening exchanges, Chelsea were hanging on at times in the second-half and were duly punished, with striker Serhou Guirassy firing a bullet header past former Rennes stopper Edouard Mendy with just minutes left to play.

The Premier League side got their win late on in France, however, as Frenchman Olivier Giroud nodded a terrific header home in stoppage time.

That result not only took Lampard’s men into the last 16, but also gave some valuable minutes to the likes of Hudson-Odoi, who has previously been linked with a potential exit from the club.

While game time has been limited for the 20-year-old, Lampard has insisted that the speedy wideman is still very much in favour and part of the long-term plans of the club.

“I am seeing constant improvements from him,” Lampard told chelseafc.com.

“I knew he had had a couple of good performances for the England Under-21s last week, I know he wants more minutes, but I have competition in that area. If he isn’t getting minutes in a period, it doesn’t mean he is out of favour with me. He certainly isn’t.

“He is still a developing player to a degree. The bit of quality he shows with the first two touches before he got his shot away was top class. I know he can do that. There are loads of great things about Callum, and I know there are things he can improve in his game. He knows that.

“He is a big player for Chelsea, he has a big future with us. His all-round game was fantastic, and he gets his goal.”

Listen to the latest episode of The Fantasy Faithful podcast now