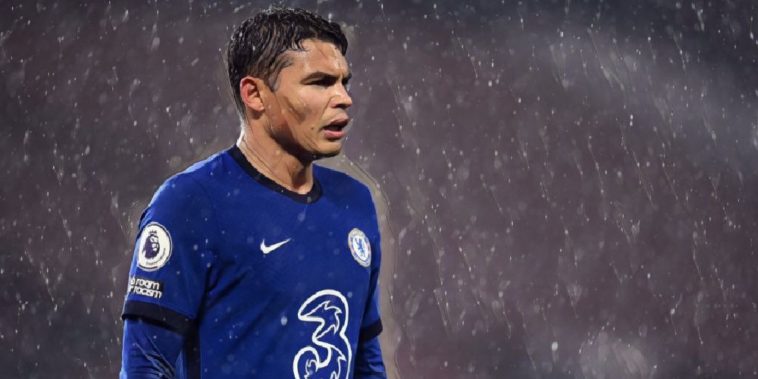 Frank Lampard has discussed his management of summer signing Thiago Silva after the veteran defender was left out of Chelsea’s midweek Champions League trip to Russia.

Silva was absent from the club’s travelling part for the clash against Krasnodar on Wednesday night, remaining in London as his teammates secured a 4-0 victory to move top of Group E.

The Brazil international’s omission came despite making a positive impression since signing from Paris Saint-Germain on a free transfer during the summer, with the 36-year-old producing an impressive performance during last weekend’s goalless draw at Manchester United.

Lampard has now revealed his reasons for leaving the centre-back out in midweek and says he is keen to carefully manage the experienced star ahead of a congested run of fixtures for the west London side.

‘Thiago is fit,’ confirmed Lampard at his pre-match press conference.

‘Taking him out of the trip to Russia was more of a maintenance issue for him and I spoke to him about it.

‘We’re just trying to make sure we get the best out of him over the course of a season and in this schedule where we have game after game after game , it made sense [for him not to be involved] in a game which involved a lot  of travelling.

‘If he had to play that game then of course he could have done but we have to put it in context of what we’ve got ahead of us. In the end it was a  nice exercise with the fact we got a result and Toni Rudiger came into the  team and played really well, which is the competition we need.’

Chelsea travel to Burnley tomorrow and have an almost clean bill of health at present, teenager Billy Gilmour their only absentee as he recovers from a knee injury.

Hakim Ziyech will be hoping for his first league start after impressing against Krasnodar, whilst Antonio Rudiger could be involved after the out-of-favour defender returned to the side in Russia.