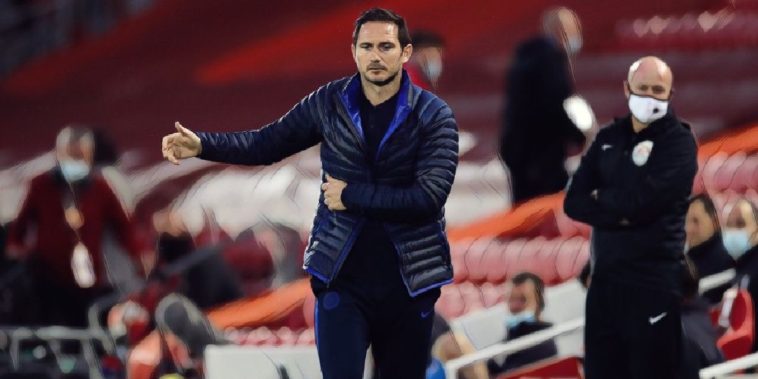 Frank Lampard has urged ‘focus’ from his Chelsea side ahead of a crucial final day of the season with the club’s hopes of securing a top-four finish in their ‘own hands’.

Chelsea currently sit fourth in the Premier League following their 5-3 loss at Liverpool on Wednesday, level on points with third-placed Manchester United and just a point ahead of Leicester ahead of the final fixtures of the season this weekend.

Lampard’s side face sixth-placed Wolves at Stamford Bridge on Sunday and know a point will be enough to secure the club’s place in next season’s Champions League, with top four rivals United and Leicester meeting each other in a huge clash at the King Power Stadium.

The Blues’ boss discussed the pressure of the final day situation but reiterated his belief in his players, admitting Chelsea should be pleased with their achievements this season as they head into Sunday’s fixture with their Champions League destiny in their own hands.

“They have to embrace that and take it on,” Chelsea’s manager said at his post-match press conference. “We’ve got a mixture of youth and sometimes that youthfulness can help but we also have players who have been in situations like this before. It comes with the territory of playing for a top club.

“We should have a feeling of achievement to this point. Not many people expected us to be in the top-four race. We now have it in our own hands.

“We’re at the Bridge. We have a really strong opponent coming in Wolves. It’s up to us.

“I’ve got belief in the players. I’ve seen a lot in the last two games, particularly against Manchester United and with Liverpool tonight, of what we are about. There’s been spirit and character in those two performances. We have to carry on with one more in the league.”

Lampard added that his side must focus on themselves and not results elsewhere in what is likely to be a dramatic conclusion to the campaign, urging his side to concentrate on achieving the result required to secure a top four finish.

“There will be a lot going on on Sunday,” he said. “What’s important for the players is they absolutely focus on themselves because it is in our own hands.

“We can’t affect what’s going on elsewhere and we have to try and get over the line.”