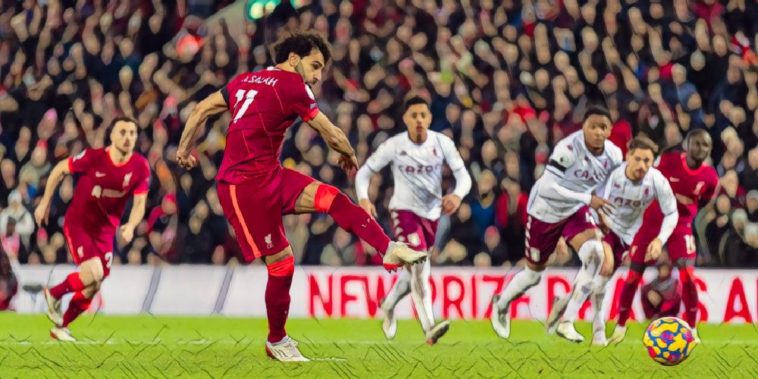 Liverpool ensured it would be a losing return to Anfield for club legend Steven Gerrard, as a Mo Salah penalty fired the Reds to a 1-0 victory over Aston Villa on Saturday.

The Villa boss – who was unsurprisingly handed a huge ovation from the home support – saw his side put in a spirited and stubborn display in a hard-fought first-half, albeit with the home side enjoying far more of the ball.

As ever, much of the Reds’ attacking play was inspired by the full-back duo of Andy Robertson and Trent Alexander-Arnold, the latter man firing over earlier on, before his teammate saw a header well save by Emi Martinez.

As their dominance grew, Jurgen Klopp’s side saw a handful of penalty appeals waved away, while Sadio Mane also hit the crossbar with a looping header.

Heading into the second-half, Martinez was once again on hand to deny Virgil van Dijk’s bullet header, although the Argentine could do little to prevent Liverpool from eventually going ahead, Mo Salah firing in from the penalty spot after having been fouled by Tyrone Mings.

Despite a late rally from the away side, the Merseysiders hung on to secure all three points, the result seeing them keep pace with leaders Manchester City at the summit.

Speaking after the match, Liverpool boss Klopp admitted the match was like ‘tooth pain’ as he saw his side only secure a narrow victory.

“The first 75 minutes was incredible football. It’s difficult,” he told Match of the Day. “The opponent defended compact. It looked really good, we played in the spaces we wanted to play but we did not finish the situations which is tricky.

Steven Gerrard returns to Anfield for the first time since he left the club in 2015 to a massive reception 👏 pic.twitter.com/0psxdUC1hA

“We came out in the second half and knew we had to keep going – and improve in moments. We were not calm enough in the last pass. We kept going. We scored with the penalty then the relief was obviously too big and it was an unnecessary open game. Like tooth pain! Nobody needs that. There are areas to improve even when we win football games, which is good.

“I really thought before the game, with Alisson in his shorts and top, that is not a lot for this game today. Yes those moments were there, I don’t want Alisson to be busy in a game to be honest. It is something we will talk about and hopefully it does not become a pattern, or whatever.”

The German was also full of praise for ‘outstanding’ goalscorer Salah, the Egyptian netting his 21st goal in all competitions this season.

“Absolutely insane. We all think penalty. Everybody wishes in the moment to take the penalty but he finishes it off. The whole game was not the easiest but the triangles we had on the right and left wing was really outstanding. In the end we did not have enough bodies in the box in the first half.”

The match saw an emotional return for club legend Gerrard – who has been tipped to replace Klopp in the future – with the Reds boss giving his endorsement for the former captain.

“The good thing is I have no problem with this sort of thing. I will not be here forever so I would love it to be Stevie! But no I did not feel under pressure today.”