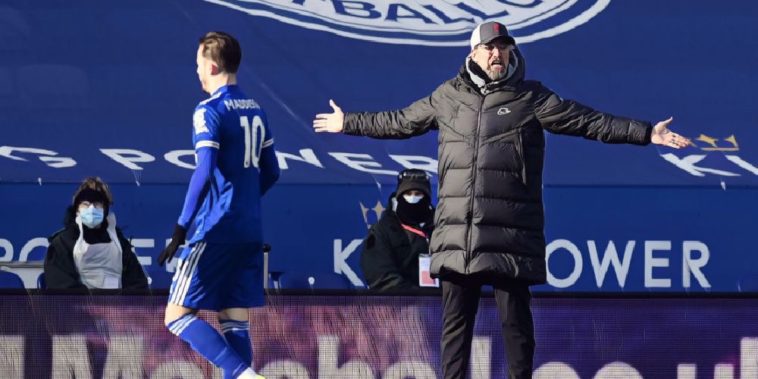 Jurgen Klopp believed that Leicester were ‘lucky’ to get back into the game, with Liverpool going on to suffer a late collapse as they lost 3-1 at the King Power Stadium.

The Foxes may have been the in-form side, but it was the champions who started strongest, Jurgen Klopp’s men controlling the opening period, despite losing James Milner to injury early on.

The visitors perhaps should have been ahead when Mo Salah found space inside the box, yet the Egyptian couldn’t sort his feet, while at the other end of the pitch Jamie Vardy hit the crossbar and had a header saved just before half-time.

In truth Brendan Rodgers’ side struggled to really exploit the untested Liverpool backline of Jordan Henderson and debutant Ozan Kabak, with the away side grabbing the goal that their play deserved on 67 minutes, Salah calmly side-footing home after some fancy footwork from Roberto Firmino in the area.

That lead lasted just ten minutes, however, as the game sprung into life. The hosts thought they’d won a penalty after Thiago’s trip on Harvey Barnes, before VAR adjudged it to have taken place outside the box, with the resulting free-kick finding it’s way into the back of the net from James Maddison’s delivery.

After initially being ruled out for offside, VAR overturned the decision in what was another incredibly tight offside call, Daniel Amartey deemed to be just onside inside the box.

The home side then took the lead just minutes later, with a miscommunication between Kabak and Alisson allowing Vardy a free strike at goal, the Reds stopper seemingly not having shaken off his high profile errors against Manchester City last weekend.

The win was then sealed with five minutes to go as Harvey Barnes raced clear to cooly curl home, the result leaving Liverpool with a lot of work to do to just secure a place in the top four.

It also means it’s a third straight defeat for the Reds in the Premier League, although Klopp stated his side dominated the game and were undone by what he felt was a ‘clear offside’ in Leicester’s equaliser.

“We conceded a goal, a really tough one to take,” he told BT Sport. “I know we discuss a lot about VAR, but I think we all agree it was a turning point in the game. I have seen it and when they stop the situation, he hasn’t even touched the ball yet. For me it looks a clear offside because he has to touch the ball – that’s it. It’s a turning point.

“The second goal is a misunderstanding, we said they need to get used to each other and they were fine for 75 minutes, it was a really, really good football game. They are one position ahead of us, but on the pitch, we were the clear dominant side. We played football, we avoided the counter-attacks, we did pretty much everything that you have to do. We scored a really nice goal, we had chances – and then we concede two goals.

“The third one, obviously we lose the ball too easily and one pass and they are done. That is something I don’t like – we were much too open at that moment. I’ve told the boys already that that is not OK. But that is the situation we are in.”

While the first goal was clear a point of frustration for the German, he admitted that his side ‘didn’t react well’ to conceding.

“Tough times, yes, but we tried everything, it’s not that we didn’t try,” he said.

“Alisson had a super game and made super saves and then at that moment he came out, I didn’t hear him shouting. Ozan [Kabak] doesn’t know him long enough, [He’s thinking] ‘Is he coming, is he not coming?’

The worst points differential by a defending PL champion after 24 games in the competition's history. pic.twitter.com/0YphJs2j0i

“The turning point was the first goal. It’s not ok, but in our situation, it’s not completely unlikely. That’s the point we take as criticism for us that it changed too much with this one goal. I don’t even think it was a foul because Barnes jumps, but then the free-kick, they score the goal.

“We didn’t react well on that, but around that, we really played top football against a really strong side like Leicester. They were lucky, they probably know it, but they finished the game and deserved the three points, but we have to deal with our own situation.

“The turning point was the first goal, We changed too much with one goal, that’s the criticism for us. We didn’t react well.”

Liverpool are back in action against RB Leipzig in the Champions League on Tuesday, with the Merseyside derby to come on Saturday.