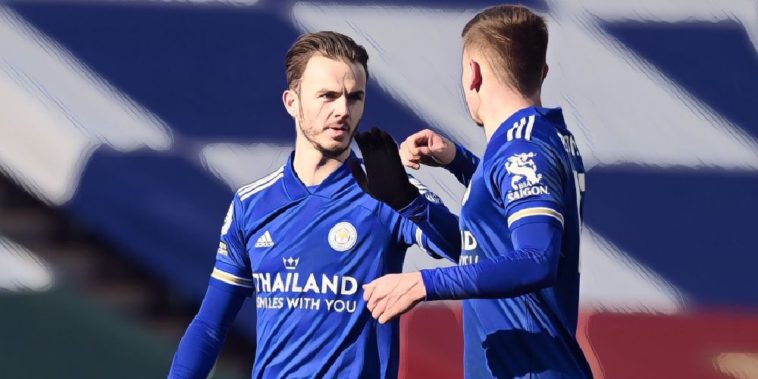 Goalscorer James Maddison has reacted as Leicester City boosted their top four hopes with a 3-1 win over Liverpool on Saturday.

The Foxes may have been the in-form side, but it was the champions who started strongest, Jurgen Klopp’s men controlling the opening period as the hosts struggled to get a foothold in the game.

The visitors perhaps should have been ahead when Mo Salah found space inside the box, yet the Egyptian couldn’t sort his feet out, while at the other end of the pitch Jamie Vardy hit the crossbar and had a header saved just before half-time.

In truth Brendan Rodger’s side struggled to really exploit the untested Liverpool backline of Jordan Henderson and debutant Ozan Kabak, with the away side grabbing the goal that their play deserved on 67 minutes, Salah calmly side-footing home after some fancy footwork from Roberto Firmino in the area.

That lead lasted just ten minutes, however, as the game sprung into life. The hosts thought they’d won a penalty after Thiago’s trip on Harvey Barnes, before VAR adjudged it to have taken place just outside the box, with the resulting free-kick finding it’s way into the back of the net from James Maddison’s delivery.

After initially being ruled out for offside, VAR overturned the decision in what was another incredibly tight offside call, Daniel Amartey deemed to be just onside inside the box.

The home side then took the lead just three minutes later, with a miscommunication between Kabak and Alisson allowing Vardy a free strike at goal, the Reds stopper seemingly not having shaken off his high profile errors against Manchester City last weekend.

The win was then sealed with five minutes to go as Harvey Barnes raced clear to cooly curl home, the result moving Leicester up to second and six points ahead of their opponents.

As well as scoring, Harvey Barnes completed more take-ons [4] and won more fouls [4] than any other Leicester City player today.

Become a key player for The Foxes. 🔑 pic.twitter.com/1iF928eCRK

While they were second-best for much of the game, midfielder Maddison praised his side’s ‘solid’ performance, before discussing their lofty position in the table.

“We know when we play Liverpool, it’s going to be tough because they can do both parts of the game very well,” he told BT Sport. “It’s a case of staying in the game. We’re a top team and we know we will get chances.

“We were solid throughout. The more they start going for it the more space opens up for [Harvey] Barnes on the counter-attack so we utilised that brilliantly I think.

“I don’t know what was going through my head and I think Anthony Taylor was lost too. He was getting told this and that – it’s a penalty, a free-kick… Daniel [Amartey] claimed the touch and got a flick-on it but it turned out to be onside. That was a big moment for us to kick on in the game.

“Jamie Vardy sniffs out little opportunities. It was a mix-up between the goalkeeper and the centre-half. It’s just one of those things. You can’t look into it too much. Alisson is having a tough time at the moment but he is a top keeper and I’m sure he will be back. I’m just happy we could pounce on that mistake.

“It’s another three points away at Liverpool. We take it game by game. We have so much quality in the squad. We have a lot of injuries by the way. It doesn’t really get talked about because we’re not the ‘big six’ but we are utilising the squad brilliantly. We are right up there and we’re not up there by fluke. We will keep working and grinding out results against big teams like Liverpool. It’s about taking the big moments. We weren’t at our best to be honest but I’ll take those big moments.”

Leicester are away to Slavia Prague in the Europa League on Thursday, before a tough trip away to Aston Villa on Sunday.