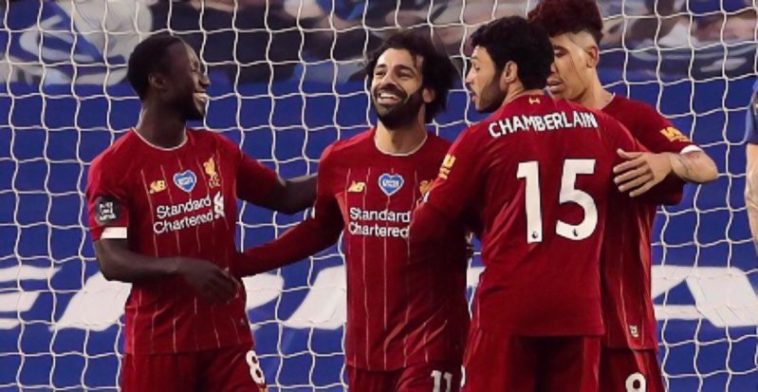 Jurgen Klopp was pleased with his side’s display after Liverpool secured a 3-1 victory at Brighton to edge closer to the Premier League’s all-time points record.

Liverpool scored twice in the first eight minutes to take control against the Seagulls at the Amex Stadium, Mohamed Salah opening the scoring after Naby Keita stole possession from Davy Propper on the edge of the Brighton penalty area.

Jordan Henderson swept home a second from just outside the penalty area moments later to double the lead, though the host’s halved the deficit before the break courtesy of Leandro Trossard’s fine finish.

The newly-crowned champions avoided a fightback and sealed the three points with 14 minutes remaining as Salah headed home Andy Robertson’s corner for his 19th Premier League goal of the season, the Egyptian international three goals behind leader Jamie Vardy in his bid to secure a third successive Golden Boot.

Klopp praised his side’s performance as they moved to 92 points for the season, the Reds needing nine points from their final four fixtures to eclipse Manchester City’s 2017/18 landmark of 100 points.

“We started really well. We had to adapt a little bit as we knew what they wanted to do but it was a little bit hard to defend,” Klopp told Sky Sports.

2️⃣5️⃣0️⃣ combined goals in all competitions under Jürgen Klopp!

”We left one or two players in a position where if we won the ball we had players in the counter-attack position. We got the first two goals with super balls but we could have scored more. I said to the boys at half-time they could have been 2-2 too. It was a nice game to watch!

“We don’t have an influence on what the other team do. We just have to react. They left two offensive players between the line so when they won the ball it was difficult to protect. When you lose the ball in the wrong moment it was difficult to defend. So they deserved the goal but we scored the third goal then could have scored more with some really good chances.”

Klopp handed a full Premier League debut to teenager Neco Williams before replacing the full-back with Andy Robertson at half-time, and the German admitting his side failed to ‘protect’ the youngster who picked up a first-half booking.

“I know in football, everybody thinks it’s not good if you take a player off after 45 minutes. He had a yellow card and we didn’t protect him well enough on the left.

”It was his first professional start so I cannot tell him not to tackle. I liked a lot of his stuff, he will learn so there is absolutely no problem. I liked a lot how he played.”

Liverpool return to action this weekend when they host Burnley at Anfield, whilst Brighton will be hoping to bounce back when they meet Manchester City at the Amex Stadium on Saturday evening.