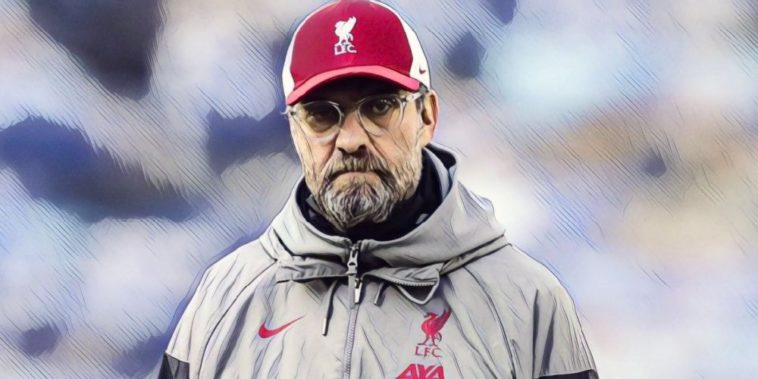 Jurgen Klopp’s frustrations boiled over once more as he embarked on another rant about the Premier League’s fixture scheduling following Liverpool’s 1-1 draw at Brighton on Saturday lunchtime.

The Premier League champions were denied all three points at the Amex Stadium in dramatic circumstances following a stoppage-time penalty for Brighton, Stuart Attwell awarding a spot-kick after consultation with the pitch-side monitor.

Pascal Gross slammed home the penalty to equalise for Brighton and cap a frustrating afternoon for Liverpool, who twice saw goals ruled out for offside by VAR as Mohamed Salah and Sadio Mane were denied.

Gross’ goal was Brighton’s second penalty of the game after Neil Maupay had earlier spurned an opportunity from the spot, dragging a feeble effort wide of the post before Diogo Jota opened the scoring for Liverpool with his ninth goal of the season.

While Klopp accepted the offside decisions, he was less than happy at the decision to hand the hosts a penalty,

“We are used to armpits. We have a toe today. It is how it is. I think the decisions were right,” he told BT Sport.

“You try to create a headline. The ref whistled it. You try always, all the time. Today I say it wasn’t a penalty. What do you want me to say? I said it was a penalty because the ref whistled it, after watching it.

“I couldn’t be more proud of the boys for how they played today. We struggled a bit in the first half an hour with the new last line, with their balls in behind because we didn’t drop in the right time. We sorted that but in the second half we had some problems with energy. Then, we sat a little bit deeper and that how the situation [around the penalty] happened.

“In the situations around the goals, we were brilliant. Mo’s goal was a brilliant goal. Sadio’s header was outstanding. The goal we scored was really cool. All good, it’s just tough times. That’s how it is.

VAR rules Robertson committed a foul on Welbeck and Brighton make no mistake from their second spot-kick of the day! 🎯 pic.twitter.com/4dfHAf0Fwe

“You always need a bit of luck to win a tough away game, but today we didn’t have luck. I thought the front three played really well together.”

Klopp once again took aim at the broadcasters when asked of about an injury to James Milner injury, the German having been fiercely critical of the fixture scheduling for sides in European competition in an unprecedented period of congestion.

“Hamstring injury, so congratulations [to the broadcasters],” he said. “And they had injuries as well because of the tough time.

“But ask Chris Wilder how we can avoid that.”

The German fired back when it was suggested that he was perhaps ‘firing at the wrong target’, with it put towards the Liverpool boss that the broadcasters ‘work within the Premier League rules’.

Klopp was unrelenting in his criticism of the television companies, however, questioning their decision to place Liverpool in the 12:30 kick-off slot after featuring in the Champions League in midweek.

“Between now and New Year, we have one more Wednesday and Saturday 12:30. Saturday after Wednesday is really dangerous for the players.

“Why did you pick us against Crystal Palace if you care? You are relying on things that we agreed on in another time (pre-Covid).”

Klopp also discussed the five substitute rule once more, with an increasing number of Premier League managers said to be in favour of returning to the law introduced following the division’s restart in June.

Excellent by @TheDesKelly putting the broadcasting argument to Jürgen Klopp when it’s clearly a Premier League issue. It’s a tough year for everyone but footballers having to play lots of football matches, risking a muscle strain, is nothing like the sacrifice made by others.

English football is the only major league in Europe to have reverted back to three substitutes, whilst the Champions League and Europa League also permit additional replacements.

Klopp also directed a jibe in the direction of Sheffield United manager Chris Wilder who this week labelled the Reds’ boss a ‘selfish politician’ over his continued pursuit of five substitutes, insisting the permitting of additional changes can ‘save the players’ from further injuries.

“When we had the talk between the managers a week ago, it was 15-5, if not 16-4 for five subs,” he continued. “Since then, nothing happened. You need at least 14 votes, but Chris Wilder, or whoever, constantly says that I’m selfish. I think all the things that he has said shows that he is selfish,

“I was in a similar situation when I was at Mainz, and all it was was about staying in the league, but now they have three subs and just one point, so it’s not working to their advantage.

“To do five subs, in a game like this is not for tactical reasons. For example, with five subs, today I would have taken off Robbo, 100 per cent, and bring Kostas Tsimikas to save Robbo, not to make our game better.

“It’s not about changing tactics and the system, It’s not like this, its just to save the players. Yes of course I save my players, but all players [at every club] have that problem.

“What I want to say is, I only go for the broadcasters for the Wednesday and 12:30 [on a Saturday], only seven managers have a similar problem, and they all agree.

“The problem is, we signed a contract, and in normal seasons its a problem. But this season, it’s an even bigger problem because of no pre-season, because of the intensity, because of the shorter season, and even though we have that slot, I say it’s not ok.”