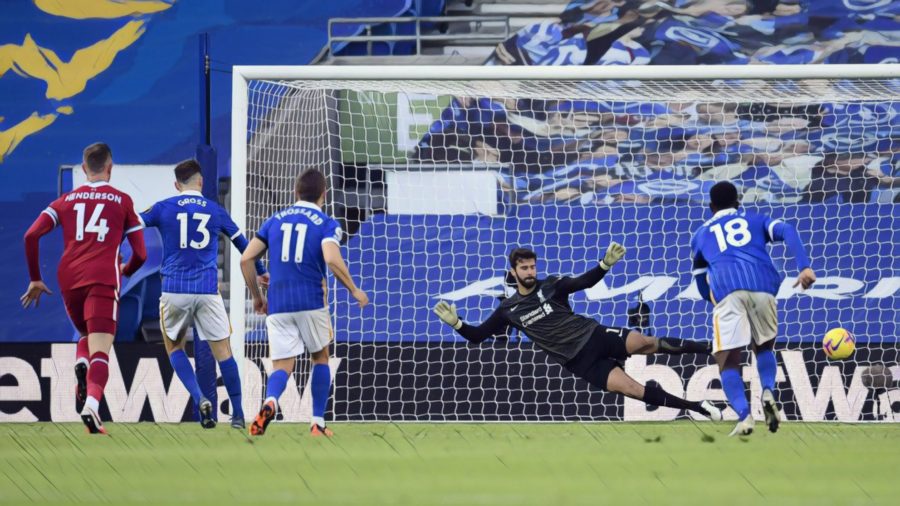 Jordan Henderson has questioned VAR after Liverpool were denied all three points in their 1-1 draw at Brighton following the award of a late penalty.

Pascal Gross equalised from the spot in stoppage-time for Brighton after the controversial awarding of a dramatic late penalty, Stuart Attwell pointing to the spot after consultation with VAR after Andy Robertson had kicked the bottom of Danny Welbeck’s boot.

It was the second penalty awarded to the Seagulls after Neil Maupay had earlier put a dreadful effort wide of the post, whilst Liverpool saw goals from Mohamed Salah and Sadio Mane disallowed for offsides.

Diogo Jota’s ninth goal of the season had looked like sealing all three points for the injury-hit Reds, though the champions were left angered by a late decision from the officials with Liverpool captain Henderson blasting the decision to award a penalty.

VAR rules Robertson committed a foul on Welbeck and Brighton make no mistake from their second spot-kick of the day! 🎯 pic.twitter.com/4dfHAf0Fwe

“It was ours,” Henderson told BT Sport. “It should be three points, in my opinion. I’ve seen the replay. Who would be happy? It’s not a pen. It feels like we’re standing here every week and discussing incidents. I don’t want to get into trouble, but for me it’s not a penalty.

“In the first half, there were things we could improve on, in the second half we did that. We had a couple of goals ruled off for offside.

“Overall we’ve got to be positive and take the performance out of it, because the result isn’t anything else but an error in my option. You’d rather get beat by two or three than end up like that. It feels like two points taken away from us.”

The draw moves Liverpool to the top of the Premier League, one point ahead of Tottenham ahead of their crucial clash with Chelsea at Stamford Bridge tomorrow.