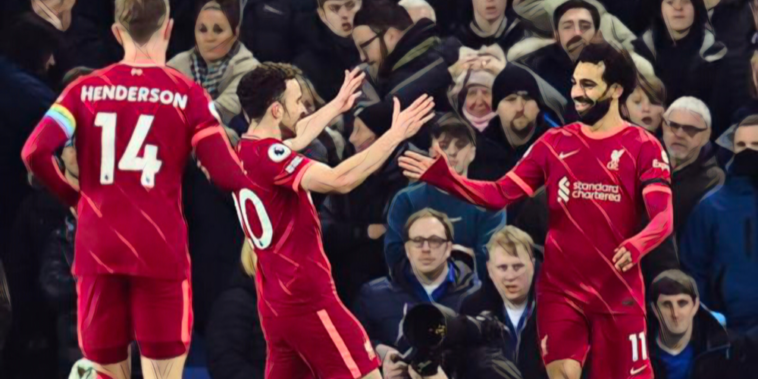 Liverpool kept pace with their title rivals after a ruthless 4-1 thrashing of Everton in the Merseyside derby at Goodison Park on Wednesday evening.

In a breathless opening few minutes, the in-form visitors twice squandered the chance to take the lead, centre-back Joel Matip first inexplicably heading wide after having been afforded the freedom of the penalty area, before Mo Salah then uncharacteristically poked over from close range.

The Egyptian international then saw an effort well kept out by Jordan Pickford just moments later as the beleaguered hosts struggled to get going, before Jurgen Klopp’s side eventually took a well-deserved lead on nine minutes following a delightful curling strike from Jordan Henderson – the Liverpool skipper having seen a late winner denied by VAR in this fixture last term.

It quickly went from bad to worse for the Toffees as Salah made it 2-0 inside the opening 20 minutes with a typically ruthless finish on the counter, after an excellent threaded pass from Henderson, albeit with the opposition defending leaving a lot to be desired.

There had been rumblings of discontent in recent weeks among home supporters following their seven-game winless run, with the mood souring even further following that dismal start to proceedings, Benitez’s men looking shell-shocked against their dominant rivals.

Facing yet another defeat on home soil in this fixture, the hosts conjured up a response through the lively Demarai Gray to spark hope of a comeback, as the game began to descend into petty squabbles and feisty challenges in-keeping with the nature of the derby.

Any potential fightback was effectively extinguished on the hour mark, however, as Salah netted his second of the evening, the 29-year-old taking advantage of a mistake by Seamus Coleman on the halfway line and racing clear, before coolly slotting past Pickford, who could have perhaps done better.

43 & 25 – Liverpool have scored 43 league goals this season, more than any other side within Europe's big five leagues (Bayern Munich, 42). 25 of those have come away from home, which after seven matches is the most in the top-flight since Burnley back in 1961-62 (25). Galore. pic.twitter.com/gUI0jSTTeZ

Three soon became four as Diogo Jota then netted in stunning fashion, the Portugal international producing an exquisite turn to get past Allan inside the area before lashing home from the angle for his fourth goal in his last three league games.

That proved to be the end of the drama as the Reds maintained their impressive start to the campaign, their four-goal haul taking them to an incredible 43 strikes for the season in just 14 league games.

Speaking after the match, Klopp said it was his side’s ‘best performance’ at Goodison Park during his tenure, with the German unsurprisingly beaming following the commanding victory, having previously admitted pre-match that he doesn’t particularly enjoy the derby.

“Later on I will enjoy watching it because I know the result, that helps it,” he told Match of the Day. “I had moments tonight that I enjoyed a lot.

“I liked what I saw and it was by far the best performance we’ve done at Goodison. We made a big step in our development that we can take these kind of games, even though they are really important for the opponent. We can put emotions to the side.

“What football moments we had in the first half – incredible! The positions we put on the pitch made it really difficult to get at us.

“We gave a goal away for no reason – that is how it is. The crowd were angry and we gave them life back. After half-time we controlled it again – we showed the boys two or three situations and the way they defended we could have sent Sadio Mane and Mohamed Salah away a lot more in one-on-one situations.

“It was for sure a nine out of 10 performance from each of the boys, apart from moments. We shouldn’t take that for granted though. It is all about the boys. It was all over a pretty good performance.”

Liverpool are next in action away at Wolves on Saturday afternoon.

Read: Remembering the Everton XI that famously beat Liverpool at Anfield in 1999