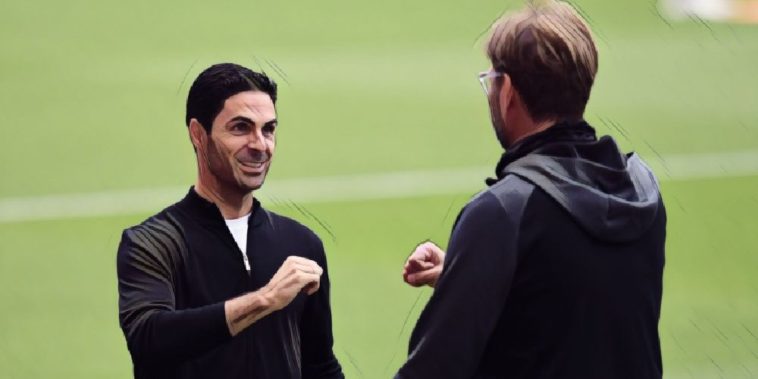 Mikel Arteta’s Arsenal side travel to Merseyside on Monday night for a highly anticipated fixture against the champions, and Liverpool boss Jurgen Klopp has been effusive in his praise of his Arsenal counterpart.

Arsenal finished the 2019/20 season in eighth, their worst Premier League campaign in 25 years, though despite that statistic, Arteta has been credited with sparking what appears to be a potentially exciting turnaround.

In his short time at the club, Arteta has seemingly moved to address a number of long-standing issues, especially regarding the clubs previously weak mentality and defensive fragility.

Arteta – in his first job as a manager after three years working as Pep Guardiola’s assistant at Manchester City – has already bested Jurgen Klopp on both of their two previous meetings, Arsenal beating Liverpool 2-1 in the Premier League back in July and again in the Community Shield last month, and speaking ahead of the game against the Gunners, Klopp was full of praise for the Spaniard.

“Mikel Arteta has shown in a pretty short period of time that he seems an exceptional football manager,” said Klopp at his pre-match press conference.

Of the 31 games Mikel Arteta has managed for Arsenal, 25 of those matches have seen us either keep a clean sheet or concede just a single goal. [@BallProgression] pic.twitter.com/3Oi7eZ33IH

“The team he sets up now, the structure of the team is absolutely exceptional. The balance between offence and defence is really good. Good organisation, freedom for the players as well, he uses players in the right positions.

“He has done a pretty impressive job and changed the whole mood of the club. So it’s a tough, tough opponent.”

Arsenal’s defence – once renowned for it’s solidity back in the ’90s and early 2000s – has been the clubs undoing during Arsene Wenger’s final years and again under Unai Emery. However, under Arteta, the club have once again started to show a new-found resilience at the back, Klopp admitting that the club’s defensive shape and pace on the counter sets them out as dangerous opponents.

“Arsenal defend properly,” said the German. “All the players are involved in defending. They defend in a 5-4-1 and when you have quality players that makes it tricky for the opposition, especially when they have speed in the counter-attack.”

The game on Monday night is the first of a double-header between the two sides, Liverpool’s 7-2 win over Lincoln on Thursday night setting up a midweek fixture in the Carabao Cup, a fixture which is a repeat of last years pulsating fourth-round tie which saw Liverpool progress on penalties after the game finished 5-5.