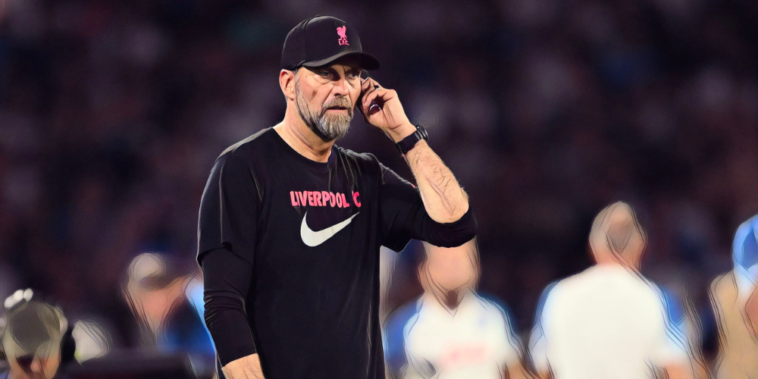 Jurgen Klopp has admitted Liverpool’s defeat at Napoli was ‘the worst game’ of his time at the club as the Reds prepare to face Ajax on Tuesday night.

Liverpool face Ajax at Anfield tomorrow evening as the club look to bounce back from a dismal defeat in their Champions League opener.

Klopp’s side were thrashed 4-1 in Naples, with the Merseysiders fortunate the scoreline was not greater on a humbling night at the Diego Armando Maradona Stadium.

Liverpool have faced strong criticism since the defeat, one which continued an indifferent start to the season. Klopp revealed that he has held talks with the squad this week in a bid to turn their form around and insists his team must improve defensively to get their season back on track.

“We met with the players, I watched the Napoli game a lot and we saw horrors. The players knew as well,” he told his pre-match press conference.

“It was the worst game since I’ve been here. We’ve had a few, Villa away, but there are always glimpses of us. In this [Napoli] game, nothing. We have to understand why. “Even is some games like Villa there were (positive signs). But here nothing.

“You solve all individual problems as a team and that’s the first thing we have to do, to follow a common idea again. My teams are based on a really strong foundation, if not nearly perfect defending.”

Klopp revealed that he has read little of the reaction that greeted Liverpool’s loss in Naples, but admits the criticism his team received was deserved following a poor performance.

“I only read about 10 words of what was said about us, but most of them were fair probably. I watched the game back, and (if it was me) I’d have asked a lot of questions about the manager and the players.”