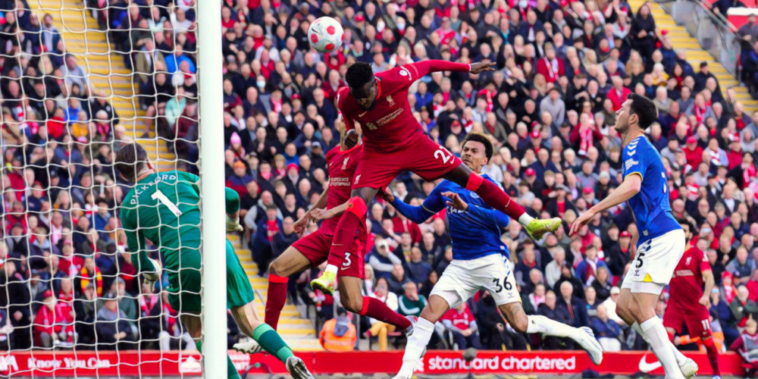 Jurgen Klopp described Liverpool’s 2-0 win over Everton as a game of ‘two halves’ for his side as the Reds moved back within a point of Premier League leaders Manchester City.

Liverpool earned Merseyside bragging rights after a 2-0 win over their struggling neighbours, though Klopp’s title-chasing side were made to work for their win at Anfield.

Everton were well-organised and spirited for much of the contest, though the Reds eventually found an unlikely way through the resistance as Andy Robertson headed home from Mohamed Salah’s cross to opening the scoring on 62 minutes.

Klopp discussed his side’s difficulties against a disciplined Everton and says the visitors made life ‘uncomfortable’ for his team during the opening exchanges.

“Thank God the game has two halves. We didn’t play particularly well in the first half. They made it uncomfortable but we didn’t get in behind the last line. We didn’t have enough movement,” Klopp told BBC Sport.

“We weren’t quick enough. We passed the ball into the area they had nine players. Second half we were much more direct and caused them much more problems. The goals were wonderful.

“We expected it [Everton’s tactics] but we didn’t react well. It’s difficult. Each ball Jordan Pickford has he takes five minutes so we couldn’t gain rhythm which you need to break down a low block. We expected them to do it.

“The amount of wins we’ve had in recent months is insane. You have to work. The boys did that again. I’m really happy.

“We stayed really cool and calm. The changes helped, Fresh players, different formation. It made it difficult for the opposition. We won 2-0, it’s absolutely fine.”

Everton were twice denied penalties after the impressive Anthony Gordon went down inside the area under challenges, but Klopp believes the officials made the right call on both decisions.

However, the German believes Everton – who dropped into the Premier League’s bottom three after Burnley’s 1-0 win over Wolves – showed enough at Anfield to raise hope of survival.

“It [the second] was clearly no penalty. He’s really good but he’s lucky not to get a second yellow. The first was not a penalty and the second wasn’t.

“If anybody thinks we fly through these games, I can apologise, it won’t happen. If we can create atmospheres like today it’s difficult to deal with us for 95 minutes.

“Everton did what they had to do. We deserved the three points. With a performance like this I think they can get the points they need.”