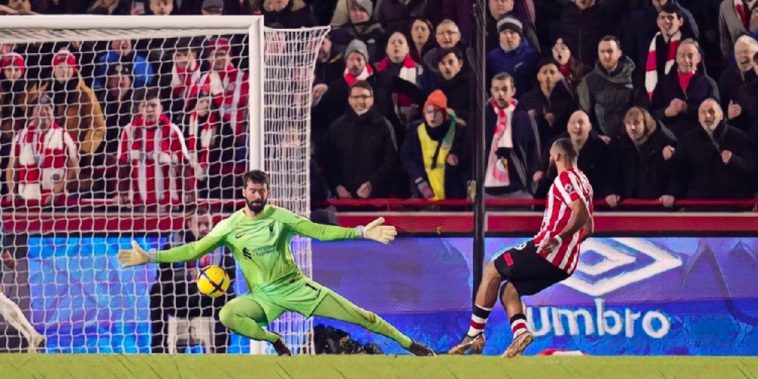 Liverpool were brought down to earth with a bang as they slipped to a 3-1 loss against Brentford this evening.

After an indifferent start to the season, the Reds had shown signs of improvement at either side of the World Cup, going into today’s game just four points off the top four spots.

Liverpool dominated the early minutes of the game and almost took the lead in the opening seven minutes, only for Ben Mee to clear off the line after Darwin Núñez had rounded David Raya.

However, having weathered the early pressure, the hosts grew into the match, and they would take the lead in the 19th minute. A corner from the right went towards Mee at the near post, and while the Brentford defender couldn’t get anything on it, it did strike the legs of the returning Ibrahima Kounate to beat Alisson.

The goal got Brentford’s tails up, and Yoane Wissa would twice have the ball in the back of the net from corners from the right, though would both be disallowed for offside, with Liverpool looking all over the place at the back at times.

However, within a minute of having the second ruled out, the Congolese made it third time lucky, meeting a Mathias Jensen cross from the right, with the header eventually being given as a goal by goalline technology despite Alisson’s best efforts to keep it out.

Liverpool improved after the break, and they too had a goal ruled out for offside shortly after the restart, Núñez getting in behind the Bees’ defence and finishing tidily, but to no avail.

A minute later though, Liverpool did pull one back, Trent Alexander-Arnold’s cross being met by Alex Oxlade-Chamberlain who headed beyond David Raya.

However, Liverpool failed to build up any real momentum, and Brentford scored the decisive goal with six minutes left to play to secure all three points. Christian Norgaard played the ball in behind the Liverpool defence toward Bryan Mbeumo, with the 23-year-old winning his physical battle with Kounate before slotting home.

The result means Liverpool have already dropped one more point (23) than they did in the entirety of last season, with Jurgen Klopp’s side four points behind fourth placed Manchester United who now have a game in hand.

Speaking afterwards, Jurgen Klopp spoke at length about his frustrations with the refereeing decisions, particularly around Brentford’s third goal.

“Of course, we don’t behave perfectly, but they really stretched the rules,” Klopp told Sky Sports. “They are really pushing and holding, and the refs…that’s obviously what you can do, and that’s why it’s really difficult.

“Yes, I wish we could have done better, but I think the third goal, I have no clue. You can only not wait for the foul in that situation. A full sprint and you get a push in the back, you lose control and you go down. The referee thought it was not a foul and VAR hides behind the phrase ‘It’s not clear and obvious’.

Liverpool have now conceded as many Premier League goals in 2022/23 as they did during Alisson's debut season.

“If it’s the other way round and it’s given as a foul, the VAR would never say say ‘no, no, no, it’s no foul’. These are the situations. He has to explain that if somebody would ask him.

“But again, then we lose 2-1 because we couldn’t score another goal, but of course, it changed the game. 10 minutes before the end, or 16 with extra time, it changes the mindset and the mood. At 2-1, I would have liked to see the last 10-15 minutes, but it was not given tonight and we have to accept that.”

Asked about the ‘stretching of the rules at set pieces’, Klopp said: “We had a meeting before the season, and they told us that the behaviour in the box that the ref will whistle, but unfortunately, I’m not sure why, but they did not.

“Do I expect it? I don’t expect anything in our favour. I just think a foul is a foul, holding is holding, pushing is pushing. There are a few things that are allowed and not allowed, and if the ref would see them, he would whistle.

“But, there is a reason that they are so successful with offensive set pieces and still concede a lot of defensive goals around set pieces, because there you cannot do the same stuff. Do it in your own box and it would be a penalty, so that is why they do well, but there are some rules and that is what you have to see.

“I know people will say now that it is an excuse. It is not. I expect us to do better, and I didn’t want to play the game that they wanted to play. But in the end, it happened like that, and we have to point at ourselves, and we do that, 100 per cent.

“The third goal has nothing to do with anything else, it’s just a foul. Come on. Yes, we will lose 2-1, but the third goal, I can really not respect.”