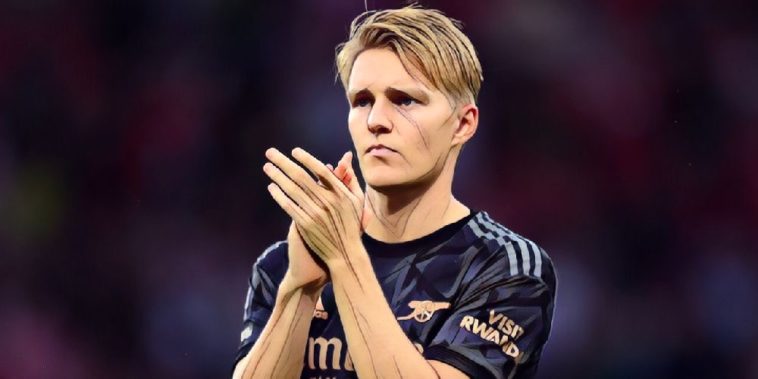 Arsenal took advantage of a surprising Manchester City slip up against Everton to extend their lead at the top to seven points following an entertaining 4-2 win over Brighton.

Meanwhile, Manchester United, Liverpool and Fulham were also the big winners at the top end of the table as they all capitalised on dropped points from Newcastle, Spurs and Chelsea.

Down at the other end, the bottom seven teams are separated by just four points, with West Ham now having lost five consecutive fixtures for the first time since 2017 to sit outside the relegation zone on goal difference.

As we do every Monday here at The Football Faithful, we have compiled our Premier League Team of the Week for the fixtures over the New Year weekend.

Leeds faced the tricky task of a trip up the A1 to face a high-flying, Champions League-chasing Newcastle United on Saturday, with Eddie Howe’s side having won eight successive fixtures in all competitions, and unbeaten since August.

While the 0-0 draw saw the Magpies continue their unbeaten streak, Leeds were able to withstand their second-half pressure, largely due to the presence of young goalkeeper, Illan Meslier.

The Frenchman made a number of vital interventions to keep his clean sheet and earn his side a point that edged them up to 16th in the table.

🔥 With 70% of the vote, you've chosen Illan as your @Boost_Drinks Player of the Match against Newcastle! pic.twitter.com/aDqOQJrg0W

Despite Newcastle not being able to find a way through Leeds’ defence, that doesn’t detract from the latest in a string of influential performances from their right-back, Kieran Trippier.

The England international made six key passes (passes that lead to a shot) against Leeds – the next nearest player in the game had two – giving him an expected assists (xA) value of 1.12.

Newcastle may have ended the game without a goal, but it certainly wasn’t down to the efforts of Trippier.

🏴󠁧󠁢󠁥󠁮󠁧󠁿 Kieran Trippier has created 50+ chances (51) this calendar year (2022) for Newcastle United in the Premier League.

What a signing. #NUFC #NewcastleUnited pic.twitter.com/m3FE644J4n

While a number of the Premier League’s ‘big six’ dropped points this weekend, Manchester City’s 1-1 draw with Everton was perhaps the most surprising. City possess the goalscoring machine that is Erling Haaland, while Everton came into the game having won just one of their previous nine.

Those struggles have, however, been more down to their deficiencies up front, with the Toffees possessing the seventh best defensive record in the division to date.

Against City, Everton centre-back Tarkowski made one interception, blocked two shots, won two of his three aerial duels and made 13 clearances as the Toffees repelled City’s attacks to earn a point at the Etihad.

James Tarkowski made 13 clearances against Man City, the most by an Everton player in a Premier League game this season.

A ball magnet in his own box. 🧲 pic.twitter.com/u5pbgavznp

Nottingham Forest also earned themselves a 1-1 draw against a ‘big six’ side, with Willy Boly a presence in both boxes for the hosts against Chelsea.

While the Ivorian should have done better for Chelsea’s goal – his weird scorpion kick-like clearance coming off the bar before dropping invitingly for Raheem Sterling to strike – the rest of his performance was excellent.

He won three of his four ground duels, made five clearances and two interceptions, while at the other end of the pitch, he bagged an assist for Forest’s equaliser, nodding a poor clearance into the path of Serge Aurier who struck to salvage a much-deserved point.

Nottingham Forest's equaliser was the first time two players from the Ivory Coast have combined for a Premier League goal since Wilfried Bony assisted Yaya Toure against West Brom in August 2015. 🤝

Brentford may have made the trip back across London with all three points after a 2-0 win over West Ham, but they certainly didn’t have it all their own way.

In fact, the Hammers will consider themselves unfortunate to get nothing from the game as they created a whole host of chances.

David Raya made some vital stops in the Brentford goal, while Ethan Pinnock was a big presence in the back line. The defender made two tackles, blocked one shot and made 14 clearances as the West London outfit repelled the Hammers attacks and left with a clean sheet.

This was one position that had few standout candidates for out combined XI, though we’ve plumped for Tyrell Malacia after he put in a solid showing. The Dutchman had lost his place to Luke Shaw prior to the World Cup, but with the Englishman having being drafted in at centre-back, Malacia has been given another opportunity to impress.

The 23-year-old got forward to join the Manchester United attacks in their 1-0 win over Wolves, while he also looked defensively solid, especially given that he was up against baby-oiled speedster that is Adama Traore in the second half.

Malacia made seven clearances, two interceptions and won three of his five ground duels, whilst also playing one key pass at the other end of the pitch.

What a signing Joao Palhinha has been for Fulham as he produced another impressive display in the 2-1 win over Southampton to help his side move up to seventh in the Premier League.

Excellent defensively once again with six tackles, four interceptions and four clearances, Palhinha was also the goalscoring hero as he rose highest at the back post to nod home an 88th minute winner for the Cottagers, taking his tally to three Premier League goals for the season, equalling his best-ever scoring campaign.

Another game, another influential performance from Martin Odegaard as Arsenal extended their lead at the top of the table with a 4-2 win over Brighton.

The 24-year-old swept home from the edge of the area from a corner to make it 2-0, albeit courtesy of a deflection, before laying on a super assist with a sensational ball through to Gabriel Martinelli who made it four.

The pass 🪄
The cold finish 🥶
The celebration 🔥

Everything about this move 🤩 pic.twitter.com/VSPQQoPiyT

His latest showing took his tally to seven goals and five assists for the season as Arsenal look to win a first Premier League title since 2003/04.

Marcus Rashford had to settle for a place on the naughty step after being dropped for being late to a team meeting, but was introduced at half-time as Manchester United struggled to break down a dogged Wolves side.

The in-form forward added a new dimension to United’s attacking play, and with 14 minutes to go, scored a superb goal that highlighted his rediscovered confidence.

Driving into the box, the England international played a one-two with Bruno Fernandes, before showcasing his impressive strength and balance to hold off the challenge of Jonny and then smashing beyond Jose Sa from close range.

There's no stopping @MarcusRashford at the moment 🔥#MUFC || #WOLMUN

He would have had a second if it weren’t for VAR, Jose Sa’s save from Rashford’s initial effort coming back off the striker’s arm and into the back of the net.

After a couple of seasons of struggle, it’s great to see Rashford back on form.

A 2-0 loss doesn’t exactly tell the whole story for West Ham, who were by far the better side at times at the London Stadium.

However, it was Brentford that left with all three points, with Ivan Toney again proving the difference for the Bees.

The 26-year-old poked home at the back post from close range after Lukasz Fabianksi had saved Christian Norgaard’s initial effort to make it 1-0, becoming just the third player to net 20 Premier League goals in 2022.

The striker then turned provider as he turned the ball into the path of Josh Dasilva who raced in behind the Hammers defence and coolly slotted beyond Fabianski.

He was stretchered off with an apparent knee injury, but fears over a serious injury have been allayed and he could return for Monday evening’s game against Liverpool.

Arsenal extended their lead at the top of the Premier League with a 4-2 win over Brighton, and while Martin Odegaard may well be the conductor in the side, Gabriel Martinelli is certainly taking a leading role in Mikel Arteta’s band.

The Brazilian was a threat throughout, and it was his initial effort that was blocked as Arsenal took the lead, the ball dropping to Bukayo Saka who slotted home.

He was again involved as Arsenal made it three, his effort being saved and spilled by Robert Sanchez in the Brighton goal, before Eddie Nketiah pounced on the loose ball.

The 21-year-old finally got himself on the scoresheet late on, getting on the end of Odegaard’s impressive pass, racing in behind Tariq Lamptey and into the Brighton area before poking past Sanchez at his near post.

Martinelli’s work rate epitomises the hard work and graft that is now being put in by Mikel Arteta’s side, and they may just well get their reward when the prizes are handed out at the end of the season.

See also – Are Arsenal shedding their stereotypes with a title up for grabs?