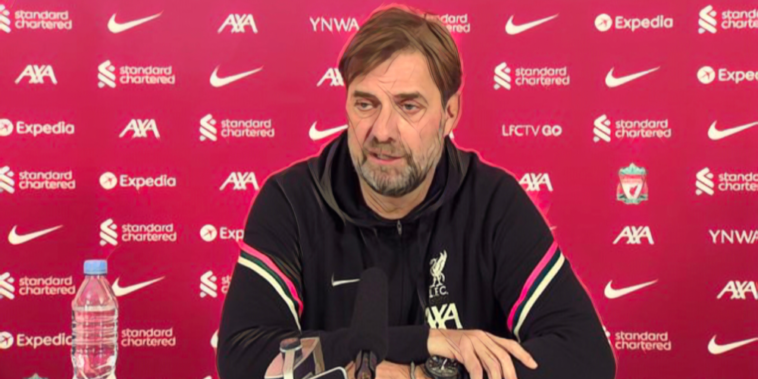 Jurgen Klopp has admitted he would miss the Merseyside Derby if Everton are relegated from the Premier League this season.

Liverpool take on their struggling neighbours at Anfield this weekend with both teams in desperate need of points, with Everton sitting just one point outside the Premier League’s relegation places after a difficult season at Goodison Park.

Klopp was asked at his pre-match press conference whether he would miss games with Everton should the Toffees drop into the Championship and admitted their absence from the Premier League would be felt in the city.

“Of course. Playing United the other night makes it different, usually the full week before you play Everton there are full talks about the derby.”

Both teams need a result for reasons at opposite ends of the Premier League table, with Liverpool in pursuit of Manchester City in the title race and one point behind the league leaders.

Klopp dismissed the notion that the importance of Sunday’s derby was bigger than usual, however, admitting he can’t remember a clash with Everton that wasn’t important to his side.

“I can’t remember a derby where it wasn’t important for us. I don’t know where we’d be without the points (against Everton), or the ones we didn’t get last season when we lost.”

Liverpool remain in the hunt for four trophies this season and the clash with Everton is the latest in a challenging run of fixtures for the Reds.

The German discussed how his team are handling the pressure of competing on multiple fronts and is hopeful Liverpool can add to their Carabao Cup success in the coming weeks.

“Not all the time, but a lot,” Klopp added on if his players are enjoying the pressure of the current situation.

“It’s an incredibly tough situation and we play pretty much all the time. We love the situation we are in. You cannot plan being in everything. We won one competition, that’s great, but there are still three more competitions to go. We are looking forward to everything that is coming up.”