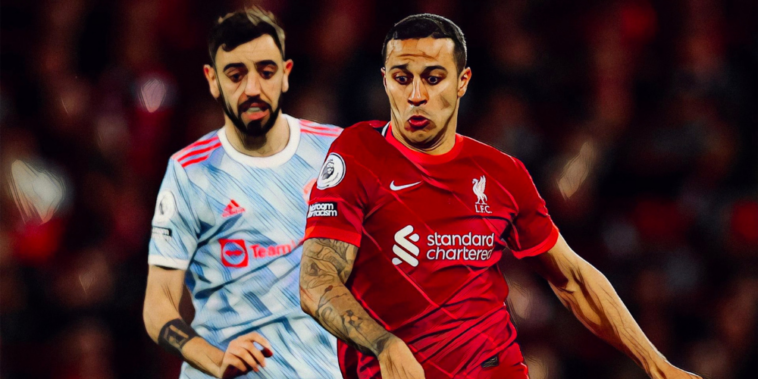 Our weekly Premier League awards honour the best – and worst – of the football action from the midweek fixtures.

Rivalries were placed aside during the seventh minute of Liverpool’s win over Manchester United, as both sets of fans applauded in respect for Cristiano Ronaldo and his family.

The Portugal captain missed the fixture after being granted compassionate leave this week, following after the tragic death of his baby son and and both sides of the North West divide joined together in a touching tribute.

Football came together in the seventh minute to show respect for @Cristiano on Tuesday night. #MUFC pic.twitter.com/27LYoetZmz

It was an occasion which provided a timely reminder of what is truly important amid the often all-consuming nature of Premier League football.

The togetherness was later marred after some away fans aimed Hillsborough related songs towards the Liverpool support, actions which have since been branded ‘completely unacceptable’ by Manchester United.

It comes after Manchester City issued an apology following a disturbance of the minute’s silence that marked the 33rd anniversary of the Hillsborough disaster before Sunday’s FA Cup final defeat to Liverpool at Wembley.

Sadly, there are sections of many fanbases still willing to engage in vile chants and greater education and punishments are required if football is to rid itself of such incidents.

On the pitch at Anfield it was all about an impressive performance from the home side, one that Thiago Alcantara orchestrated in fine fashion.

Thiago was in brilliant form during a masterful midfield performance, dictating the rhythm of the game with an effortless ease as Liverpool controlled proceedings.

He registered a 98% pass accuracy in the first half after completing 59/60 of his attempted passes, in a performance that was full of flawless close control, body feints and signature passes almost impossible to read.

Thiago was outstanding in the weekend win over Manchester City at Wembley before producing one of the individual performances of the season against United, having found the form many had anticipated upon his eagerly anticipated arrival from Bayern Munich.

From his nonchalant stud rolls to zipped passes between the lines, Thiago can be a joy to watch on this form and the midfielder could yet be the difference-maker as Liverpool head towards some huge clashes during the season’s run in.

Miguel Almiron often fails to earn the rewards his hard-running deserves, but the Paraguay midfielder capped another lung-busting burst with a superb finish to earn Newcastle a 1-0 win over Crystal Palace this week.

Almiron raced onto Bruno Guimarães’ lofted pass before shrugging off the challenge of Tyrick Mitchell and bending an outstanding finish into the top corner.

It’s a goal that moves Newcastle to the magical 40-point mark for the season and a top-half finish is within reach after a third consecutive Premier League win.

Liverpool’s second goal against Manchester United deserves a mention, as Mohamed Salah put the finishing touch on a 25-pass move that included each player – with the exception of Virgil van Dijk – and an outstanding swept assist from Sadio Mane.

Arsenal’s young guns delivered on a memorable night at Stamford Bridge, as academy products Eddie Nketiah, Emile Smith Rowe and Bukayo Saka all scored in the 4-2 win over Chelsea.

Smith Rowe and Saka each moved to ten league goals for the season for the Gunners, who became just the third Premier League team to have two players aged 21 or under score 10+ goals in a single campaign.

2 – Emile Smith Rowe and Bukayo Saka have both scored 10+ goals in the Premier League this season; just the third time two players aged 21 or under have done so for the same team in a campaign (Bridges & Kewell for Leeds in 99-00, Rooney & Ronaldo for Man Utd in 06-07). Jewels. pic.twitter.com/CeVp9fzTmX

Leeds (Michael Bridges and Harry Kewell) were first to achieve the feat in 1999/2000, before Wayne Rooney and Cristiano Ronaldo followed suit for Manchester United in 2006/07.

Ralf Rangnick has said there will be major changes at Manchester United this summer, insisting there will be an overhaul of the squad following a season that is disappearing into nothingness.

The excitement that greeted last summer’s recruitment has turned into despair following a second humbling to Liverpool this season, with the Red Devils facing a huge task to salvage a top four finish and Champions League qualification.

This weekend’s clash with Arsenal shapes as a must-win game.

Harry Maguire defended his form this season ahead of Manchester United’s trip to Liverpool, telling Sky Sports that there was ‘a reason’ he continued to get picked at Old Trafford.

“This season I’ve had some bad games, but I wouldn’t be playing every game for Manchester United in the starting eleven if I’d been playing bad every game or not playing well enough.

Those reasons are becoming increasingly difficult to see after another nightmare from the Red Devils’ captain, who followed his horror-show in the reverse meeting with Liverpool with another shambolic showing at Anfield.

Maguire found himself in no man’s land for the game’s opening goal, leaving his backline but failing to get tight enough to Sadio Mane to prevent the forward’s ball in behind.

His positioning was again poor for Liverpool’s third as Mane peeled away from the centre-back to score, with Maguire again taking the brunt of the criticism for another poor performance.

He’s not alone in enduring a dreadful time this season, but he’s been a liability on too many occassions. His pre-match comments are both a concern and tone-deaf, with self-reflection key if Maguire is to emerge from the most challenging of periods.