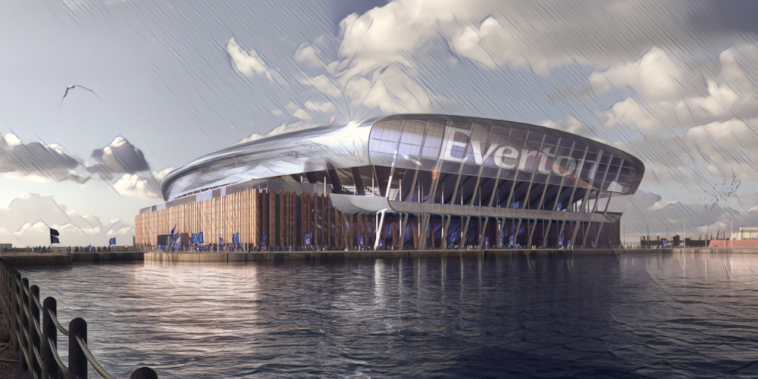 Bill Kenwright has hailed a ‘momentous day’ for Everton after finally breaking ground on the construction of the club’s new stadium.

The club reached an agreement to acquire the land from Liverpool council back in March 2017 with official planning permission not being submitted until December 2019. The coronavirus pandemic slowed down the process, with permission only being approved in February of this year..

Everton finally took possession of the site last month, with work officially starting today, the first jobs being the repair of the dock wall, and demolition of non-listed buildings, while pipework will be laid before the dock is filled in later this year ahead of the stadium build.

The club chairman was in attendance as construction work finally began on the Toffees’ new home at Bramley-Moore Dock, with the Merseyside club having financed the building of a new 52,888 capacity home on the waterfront.

The £500m project is expected to be open for the 2024/25 season and Kenwright – who was joined by Chief Executive Denise Barrett-Baxendale and Players’ Life President Graeme Sharp – hailing today’s progress as a ‘momentous day’ in the future of the club.

A world-class stadium on the waterfront. Our future home. 😍 pic.twitter.com/hhxgS7G5J1

“This is a momentous day,” Kenwright told the club website. “One that we have all been waiting for. To know that Evertonians and the people of this great city are together with us on this journey is a special feeling. Now that the work has commenced we can all watch our magnificent home as it comes to life.

“I am stating the obvious, but must reiterate that this day could not have happened without Farhad’s continued support on every level and the drive and determination of our CEO Denise, and her team.

“In a few years’ time we will, of course, be bidding the fondest farewell imaginable to our cherished home at Goodison Park. That sad day will be made easier because we know we are going to an astonishing new stadium that will bring our fans and their children – and their children’s children – the kind of joy throughout the next century that we have all shared in Liverpool 4.”