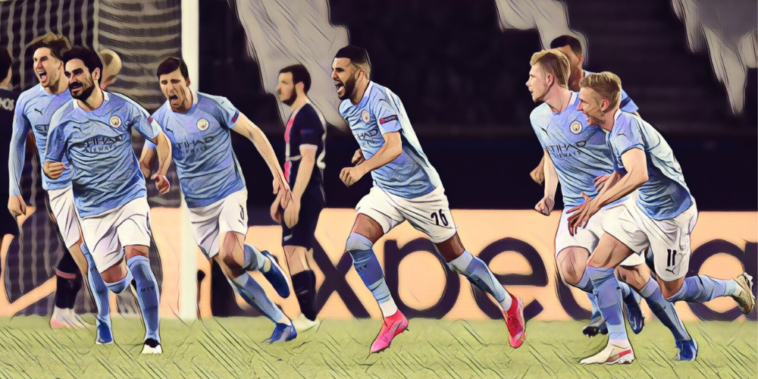 Kevin De Bruyne has praised Manchester City’s performance after his side came from behind to beat Paris Saint-Germain 2-1 in the first leg of their Champions League semi-final.

Riyad Mahrez’s free-kick handed Pep Guardiola’s side a priceless advantage ahead of next week’s return fixture at the Etihad, the winger sealing an impressive second half fight-back from the visitors who took control of the tie.

City came under huge pressure during an entertaining opening period and fell behind to Marquinhos’ early header, but rallied after the break in fine fashion as goals from De Bruyne and Mahrez edged City closer to a first ever Champions League final.

PSG – who finished the clash with 10 men following Idrissa Gueye’s red card – faded following their positive first half performance and De Bruyne admits the semi-final showdown was ‘a game of two halves’.

“It was a game of two halves,” De Bruyne told BT Sport.

”We started well in the first 10 minutes but PSG are an unbelievable team and have great quality up front. It was a shame the way we conceded. After that they had a couple of small chances. After 25 minutes we changed the way we pressed them and it became better.

“The second half was much, much better. We put them under pressure. The first goal was a little bit lucky with the way it went in, but we played great football and we did well.”

De Bruyne discussed his side’s reaction at the interval having been second best during the opening 45 minutes, with their performance after the break amongst the club’s best in European competition under Guardiola.

That was one of the best performances, in an away leg, by an English side in the history of European football. Absolutely outstanding from @ManCity 🙌🏻

The Belgium international admits his side showed patience as they sought to take control and was delighted to secure a narrow first leg advantage following a ‘tough’ test against last season’s runners-up.

“The first half, we were a bit too rushed, trying to go forward too quickly and that’s not the way we are set up as a team. In the second half we tried to find space more patiently. They’re a tough team to play against. The progression we made as a team was good.”

The 29-year-old’s equaliser came in fortuitous fashion as his cross evaded everyone including a static Keylor Navas to find the bottom corner.

De Bruyne then stepped aside at a set-piece to allow Mahrez to put City within touching distance of a maiden Champions League final, though was keen to stress there is plenty left to be done before the club’s place in Istanbul is secured.

Speaking on his goal, he added: “It set up in a perfect position. It’s so difficult for the goalkeeper because he expects someone to touch it.

“We kept going and with the second goal Riyad is good for us. He asked me if he could take it and I said ‘yes, if you believe in yourself’. He scored. Who am I to say something?

“There is still a game to go and we have to concentrate on that.”

Read – Rating the impact of PSG’s five most expensive signings