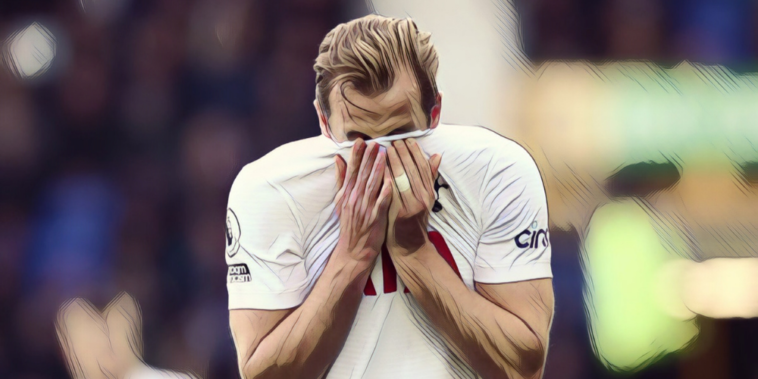 Harry Kane has opened up on his early-season struggles following a ‘whirlwind’ summer with England at Euro 2020.

Kane has endured a disappointing start to the Premier League season and has scored just once from nine league starts, his performances well short of the standards the 28-year-old set in winning the division’s Golden Boot in 2020/21.

The England captain was also subject of transfer speculation during the summer after revealing his desire to leave Tottenham, his desired move to Manchester City failing to materialise before his stuttering start to the campaign.

Kane has now opened up on his recent form and has spoken on the struggle of bouncing back from the ‘whirlwind’ of England’s campaign at this summer’s European Championship, with the Three Lions reaching the final before the eventual defeat to Italy.

“It’s always hard when you finish a major tournament,” he said at a press conference on Thursday. “The last two tournaments we’ve got to a semi-final then a final, and it takes a lot out of you. It’s not just physically, it’s mentally as well.

“Then before you know it you’re back playing in the Premier League so I guess you never really have a chance to take it all in and learn from what happened.

“It almost becomes a bit of a whirlwind at times and it’s about adapting to that and getting back into the swing of things as soon as possible. For me it’s about getting back to basics, getting back to the training pitch, and working hard there. We play a lot of games through the year so there’s not much time to recover and reflect.”

Kane was asked whether this has been the toughest period of his career and admits the pain of England’s Euro 2020 final defeat will remain with him for some time, though admits he is now keen to refocus following a demanding summer of major tournament football and transfer speculation.

“Losing a European final for your country at Wembley will probably stay with me the rest of my career,” he admitted. “You never really get over those things, unless we go and win a major tournament. That always stings but I’m pretty used to getting back into things.

“There was a lot of speculation over the summer, that’s the first real time that’s happened to me. But that’s part and parcel of being a big player, having to deal with those situations, and I think I dealt with it well. Now it’s about focusing. There’s still a long way to go at club level (in the season) and we’ve got these two games to finish off what’s been a great calendar year (for England).”

Kane is currently with the England squad ahead of the nation’s World Cup qualifiers against Albania on Friday and San Marino on November 15, as Gareth Southgate’s side look to secure their place at the 2022 tournament in Qatar.