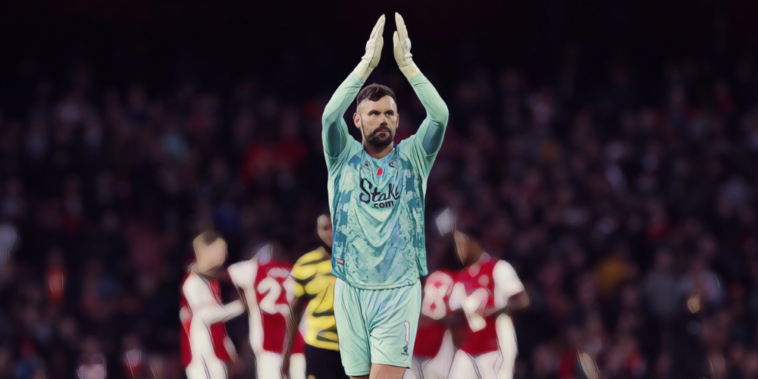 While his expert reflexes ultimately proved in vain as the Hornets went on to suffer their seventh loss of the season, the former England international has now ensured his place in the record books as he became the joint-record holder for most spot-kicks saved in the Premier League era.

With that in mind, here’s a look at who joins him on the list for most penalties saved in the top-flight since the 1992/93 campaign:

The former Manchester United and Everton stopper enjoyed an impressive 13-year stint in English football, having made the switch to Old Trafford in 2003 amid something of a turbulent period for the Red Devils in the goalkeeping department, following the departure of Peter Schmeichel four years earlier.

After a strong debut campaign that saw him named in the PFA Team of the Year and also start the FA Cup final win over Millwall, the USA international fell out of favour the following season, before joining the Toffees, initially on loan, in 2006.

It was at Goodison Park that he truly made his mark in the Premier League, going on to make 354 league appearances for the club during his decade-long stint on Merseyside and becoming one of just six ‘keepers to have scored in the competition, after a fluky, wind-assisted goal against Bolton Wanderers.

His time at the club also saw him save two penalties in an FA Cup semi-final shootout win over former club United in 2009, while in the league he notably saved a Jermain Defoe spot-kick in stoppage time to clinch a point against Tottenham in the 2009/10 season.

Still the starting stopper at West Ham United, Lukasz Fabianski has spent the last 15 years in the Premier League, having originally joined Arsenal in 2007 from Polish side Legia Warsaw.

Despite spending the next seven years with the Gunners, the Poland international failed to truly establish himself as the club’s first-choice ‘keeper, spending much of his time battling it out with compatriot Wojciech Szczęsny.

While he made vital shoot-out saves in the FA Cup semi-final victory over Wigan Athletic in 2014, his first Premier League penalty stop didn’t come until his move to Swansea City, as he denied Leicester City’s Riyad Mahrez in a 2-1 defeat in August 2016.

Since that spot-kick, no ‘keeper has made more penalty saves in the division, with three of his seven Premier League spot-kick saves having come since his move to the London Stadium in 2018, including his denial of Ademola Lookman last season following the then-Fulham forward’s tame Panenka attempt.

Not only included on this list, former Bolton Wanderers man Jussi Jaaskelainen also holds the acclaim of being one of just seven ‘keepers to have made two penalty saves in a single Premier League game, having done so against Blackburn Rovers back in October 2006.

With his side leading 1-0 following an Ivan Campo header, the Finnish stopper then ensured all three points by saving two penalties in the final five minutes, denying both Benny McCarthy and Jason Roberts in a dramatic end to proceedings.

The 46-year-old spent 15 years with the Trotters after his arrival in 1997, before enjoying a three-year stint at West Ham and a two-year spell with Wigan.

His lengthy spell in English football saw him make 436 Premier League appearances, while he is 14th on the all-time list for clean sheets, having registered 108 shutouts.

One of the few active players on this list, the current Celtic stopper has seen his reputation tarnished in recent years, yet was a fine stopper in his pomp at Manchester City, notably winning the Golden Glove award four times in the space of just five seasons between 2010 and 2015.

Having initially joined City in 2006, it wasn’t until four years later that the Shrewsbury-born ‘keeper eventually nailed down a starting berth at the Etihad, having spent a hugely successful campaign on loan at Birmingham City during the 2009/10 season.

The England international played an integral role in the club’s league title triumphs in both 2012 and 2014, before the arrival of Pep Guardiola spelled the end for his time in Manchester in 2016.

After a disappointing loan stint with Torino, he returned to English football with another temporary spell at West Ham, before joining Burnley in 2018 – where he recorded his most recent Premier League penalty save in a 2-0 defeat to Manchester United in September 2018.

A switch to London rivals Tottenham Hotspur failed to work out, although the 34-year-old has been an everpresent at Celtic Park since his summer move.

Another man no longer plying his trade in the Premier League, Simon Mignolet spent nine years in English football, although is perhaps best remembered for his turbulent stint at Liverpool.

While prone to the odd error and inconsistent display, the Belgian stopper had an excellent penalty saving record during his time on Merseyside, having kept out eight spot-kicks across all competitions in his six-year spell with the club.

That impressive tally includes a spot-kick save on debut, as he denied Jonathan Walters in the 88th minute to help his new side clinch a 1-0 win over Stoke City, while he also saved Theo Walcott’s attempt in an enthralling 4-3 win over Arsenal at the Emirates in 2016.

The former Sunderland man’s final Premier League penalty save came in a 3-2 win over Leicester City in 2017, with Mignolet signing for Club Brugge two years later.

One of three goalkeepers to have made nine penalty saves in the Premier League era, former England international Rob Green enjoyed a lengthy playing career in English football, emerging onto the scene at Norwich City in 1998, before calling it quits after a solitary season at Chelsea in 2019.

His most memorable spell, however, came at West Ham United, where he saved seven of his nine spot-kicks, including from Cristiano Ronaldo in a 2-1 win over Manchester United in December 2007.

He also made two further penalty saves after moving to Queens Park Rangers in 2012, notably denying Steven Gerrard in a 2-1 defeat, having also previously denied his former international colleague in a 3-0 loss while with the Hammers.

After leaving for Leeds United in 2016 – where he made 46 Championship appearances in his one season at Elland Road – Green spent the final two years of his career with Huddersfield Town and then at Stamford Bridge, albeit without making an appearance for either club.

Like Jaaskelainen, Heurelho Gomes is one of just seven ‘keeper’s to have saved two penalties in a single Premier League game, with the Brazilian having actually gone one better by achieving the feat on two occasions.

The former Tottenham man had some notable lows during his time in English football, yet seemed to thrive when it came to spot-kicks, twice saving from Darren Bent in a defeat to Sunderland in 2010, albeit with the striker having already dispatched a penalty earlier in the game.

Gomes then repeated the trick while at Watford in April 2016, helping the Hornets to a 1-0 win over West Bromwich Albion after twice saving from Saido Berahino, the second attempt having come in the 87th minute.

Joining his former teammate at the top of the pile on nine penalty saves is Ben Foster, with the 38-year-old pulling off an excellent stop to deny Arsenal skipper Aubameyang in the recent defeat at the Emirates.

The Englishman began his professional career at Stoke City, before making a move to Manchester United in 2005, where his finest hour came in the League Cup final victory over Spurs in 2009 in which he saved from Jamie O’Hara in the shootout.

Those cup-winning heroics also made the headlines with Foster having admitted to researching the opposition’s penalty takers on his iPod, prior to the eventual victorious shootout.

He would, however, never make a penalty stop in the league while with United, with the majority of his spot-kick saves coming during his time at West Brom and during his two spells at Watford, with time left for the veteran to add even more to his tally.