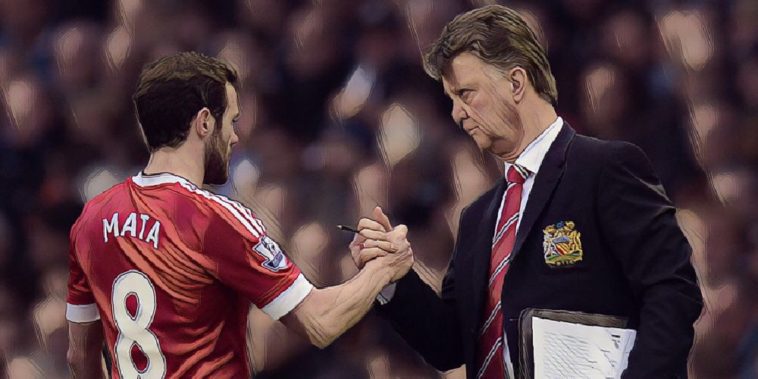 His football may not have been the most sparkling the Premier League has ever seen, far from it, but here at The Football Faithful, we do love stories about Louis van Gaal nonetheless, and Juan Mata has opened up on his first meeting with the former Manchester United manager, as well as his ’emotional’ farewell.

Let’s be honest, you don’t get a nickname like ‘The Iron Tulip’ for no reason, with the Dutchman a notoriously difficult character to please with an unwavering belief in his so-called ‘philosophy’.

Van Gaal was appointed as Manchester United manager in the summer of 2014, charged with putting the club back on the right track following the unsuccessful David Moyes era.

Writing in his new book, ‘Juan Mata: Suddenly a footballer’, the Spaniard recalls his first, and rather intimidating meeting with the former Barcelona and Bayern Munich boss upon his arrival at Old Trafford.

“Hi, I’m Louis van Gaal, please can you introduce yourself and tell me things about you?”, writes Mata.

“The manager, Ryan Giggs, myself and a bottle of Rioja wine – which he suggested we should try – were in that room.

“It was pre-season, Los Angeles, and I was about to ‘introduce myself ’ to my new coach.

“Those who know Van Gaal know how intimidating he can be, face-to-face. Things about myself? I thought. What does he mean? I didn’t know where to start. I took the safe route.

“I know that,” he interrupted. “Tell me about your personal life. Do you have a wife? Children? What do you like apart from football?”

“He started firing off direct questions about my life and career before moving on to footballing matters: ‘Where do you think you can play? What’s your position? Where do you see yourself in this system?’

“Louis wanted to see what we were made of and how we reacted through his interrogation. He simply wanted to get to know his players better on and off the pitch.

“The frightening aura around him soon dissipated to reveal a kind-hearted man. We started to notice how emotional he would get during his briefings.

“When we had played very well or covered more ground and had more chances than the opposition, you could see the spark in his eyes, portraying how moved he was by his players’ effort.

“He would also tell us about how he had received a letter from a mother thanking him because three players had stopped to sign autographs for her children after waiting for us for hours outside the training ground. He was genuinely moved by those small details.

With Louis Van Gaal at the game, let's look back on his best moments… #LivMun pic.twitter.com/ATyoBvzsmw

“On the pitch, he had a very special style of training that was structured in a rather routine manner. You were clear about what you were going to do before each session, which drills you would be doing and how you would prepare for games.

“He really liked getting us to play on the deck and only opting for long balls as a last resort. His preference was for us to bring the ball out and play a passing game.

“Off the pitch, he was also very structured in matters like all of us having lunch together at the training ground. We divided ourselves into tables and had to wait for one table to finish picking their food before we could pick ours.

“When we travelled, whoever was one minute late was handed a not insignificant fine.”

Despite his pedigree, Van Gaal was unable to steer United back toward’s the top of the Premier League, finishing sixth in his second season at the club, seeing him sacked in the summer of 2016, just hours after steering the club to victory in the FA Cup final. Mata recalls the emotional side of the Dutchman’s character as he said his farewell’s in the Wembley dressing room.

“At the end of his time at the club, on his ‘farewell’, he let his emotional side take over and opened himself very honestly to us: ‘I don’t know if I’m going to be here next season, but I want to tell you anyway how proud I am of every single one of you. We fought together in adversity and we ended up lifting this special trophy. That is something that nobody will be able to change. Thank you to all of you’.

“We had just won the FA Cup minutes earlier and he was saying ‘goodbye and good luck’. He handed out pieces of paper to each of us with our return date on it, as he had organised the pre-season for next July.

“We all knew this was a routine process, going through the motions, because there were already so many rumours of him being sacked.

“Only minutes after lifting the FA Cup trophy, they would end up being true.”