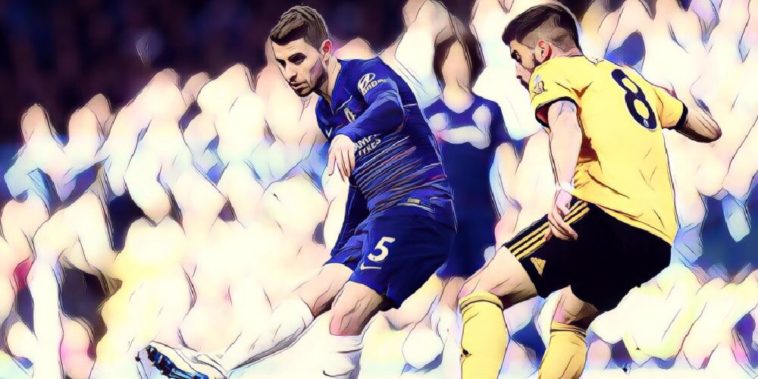 The agent of Chelsea midfielder Jorginho has revealed the midfielder’s happiness at Stamford Bridge and says the Italian’s long-term future remains with the club.

The former Napoli star was linked with a return to Italy after just one season at the club, with speculation emerging that former Chelsea boss Maurizio Sarri was interested in reuniting with the midfielder at Juventus.

Having worked together in Naples, Jorginho followed Sarri to Stamford Bridge during the 2018 summer transfer window, but endured an indifferent debut season at the club.

The Italy international’s performances came under particular scrutiny following Sarri’s decision to play him in the defensive midfield position, ahead of N’Golo Kante who had starred for the club in the role recent seasons.

Despite the reports linking him with Juventus, the player’s agent, Joao Santos, says Jorginho’s future remains in the Premier League and that the 27-year-old intends to stay at the club for the remaining four years of his contract.

“On August 31st I was with him in London, we watched Juventus-Napoli together. It is complicated to lose this way, but I see a more competitive Napoli,” he told Radio Kiss Kiss Napoli.

“If Sarri has tried to take him to Juventus? No, nothing like that has happened. We have a medium-long term project at Chelsea, as we did with Verona and Napoli.

“There are five years of contract and we say he would like to stay there for at least four more.”

Azpilicueta names the former Chelsea player who was a ‘big influence’