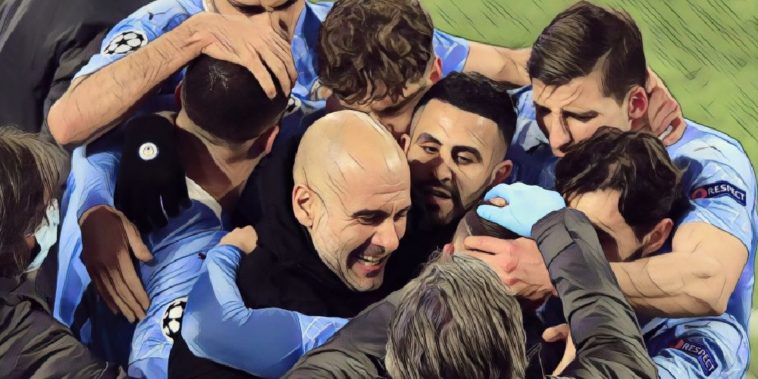 Pep Guardiola’s Manchester City booked their place in the Champions League semi-finals with a 4-2 aggregate win over Borussia Dortmund in Germany.

Manchester City came into the game with a 2-1 lead from the first leg last week, Phil Foden netting a 90th minute winner after Marco Reus had equalised.

It was another young English talent who would open the scoring in the Westfalenstadion, 17-year-old Jude Bellingham backing up his impressive performance at the Etihad to put Dortmund ahead on the night and on away goals. Erling Haaland chased down a ball over the top, held it up well before laying it back to Mahmoud Dahoud, his effort being blocked but falling to the former Birmingham City man, who composed himself, picked his spot and placed it high and beyond Ederson.

City increased the pressure but were unable to find a breakthrough before the break, Kevin de Bruyne seeing an effort come back off the bar while Marwin Hitz kept out a close-range effort from Riyad Mahrez.

The Premier League leaders would however regain their aggregate lead within 10 minutes of the restart, Mahrez smashing home from the penalty spot after former Liverpool midfielder Emre Can was adjudged to have handled the ball in the area, despite his suggestions that he had initially headed the ball onto his arm.

Much has been written about City’s Champions League record under Pep Guardiola – failing to make it beyond the last eight since the Catalan’s arrival at the club – however, they ensured that record would be finally ended at the fifth time of asking as academy graduate Foden fired home a crucial second away goal from the edge of the area following a short corner, although ‘keeper Hitz should probably have done better after getting a hand to it at his near post.

Phil Foden scores a crucial goal on the road for Man City! 🎯

You can see what it means to Pep Guardiola! pic.twitter.com/uYXrZlLYns

City saw out the victory to book a last-four fixture against PSG, and understandably, Pep Guardiola was delighted steering the club to the semis for the first time since 2015/16.

“I am incredibly happy for this club, for this chairman and for the fans, everyone,” he told BT Sport.

“It is the second time in the semi-finals so it is not history in the club, but we start to build it.

“We were brilliant except the first 10 minutes where they were good.

“I’m incredibly happy to be in the semi-finals, to be one of the best four teams in Europe, to be against big, strong teams and we will try to be good.

“This competition is nice but also so unfair because we are judged as a failure or a disaster when we are knocked out. You play 11 months for the Premier League and the other competitions.”

Asked about the awarding of a penalty, he said: “Today it was a penalty with the hand and maybe not given on another day it could be not given. We were out for handball when it was not given against Tottenham. This competition depends on the situation. But the way we played in the second half was with personality.”

When Foden netted his decisive strike, the youngster and his teammates raced towards his manager to spark jubilant scenes on the touchline.

“He found me, he ran everyone and found me. That’s for all the club, all the people that work so hard, to achieve what we have achieved so far.

Next up for Man City is their FA Cup semi-final fixture against Chelsea as their pursuit of an unprecedented quadruple continues.

“We don’t talk about winning all four. Now we take one game at a time.”