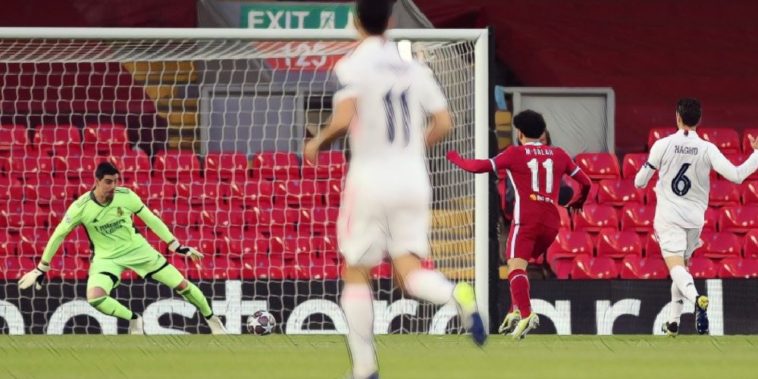 Liverpool’s Champions League hopes were brought to an end as they missed a whole host of chances in a goalless draw at Anfield to lose 3-1 on aggregate to Real Madrid.

After their disappointing display in the Spanish capital last week, Mohamed Salah’s away goal meant that a 2-0 win would be good enough for Jurgen Klopp’s side.

The Reds have produced plenty of famous comebacks under the Anfield lights, and they burst out of the blocks right from the off, with Salah spurning a superb chance to open the scoring inside two minutes, while Thibaut Courtois was also forced into a fine extended save to deny a James Milner effort from range shortly after.

After its somewhat frantic start, the game would eventually settle down as both sides enjoyed spells of possession, Karim Benzema sending a reminder of his attacking threat as he saw an effort come back off the upright.

The Reds would continue to be wasteful throughout the game, with Salah and Gini Wijnaldum both blazing over before the interval, while Roberto Firmino squandered opportunities shortly after the restart.

As the game went on, Real Madrid showed less and less ambition as they ensured they saw the game out, while Liverpool continued to be wasteful with only four of their 15 attempts ending up being on target.

9 – This was Liverpool’s ninth two-legged knockout tie in the UEFA Champions League under Jürgen Klopp, and only the second time they have failed to win both home and away in the tie (also versus Atlético de Madrid in the Last 16 in 2019-20). Real. pic.twitter.com/7oR5lW4hWL

Speaking after the game, Jurgen Klopp was relatively happy with his side’s overall performance but conceded his side simply haven’t been as ruthless in front of goal as they have in recent seasons.

“You always need the key moments,” he told BT Sport. “We didn’t lose the tie tonight, we lost in Madrid. It was uncomfortable for Madrid. We were good, aggressive, had chances.

“If and when is not interesting. We didn’t score and then the experience of Real Madrid played the tie down. That is ourselves this year with the finishing.

“We know how often Mo Salah finishes these things with closed eyes. Not here. Tonight it was absolutely OK, but we are out.”

The Reds’ focus now turns to ensure they feature in next years edition of the competition, with Klopp’s side currently sitting sixth in the Premier League, three points behind fourth-placed West Ham with a game against Leeds up next on Monday evening.

“We love this competition and for other reasons, it is very important we are back in it,” Klopp said of the Champions League. “We can now concentrate on the Premier League and we will. We have to work our socks off against Leeds.”