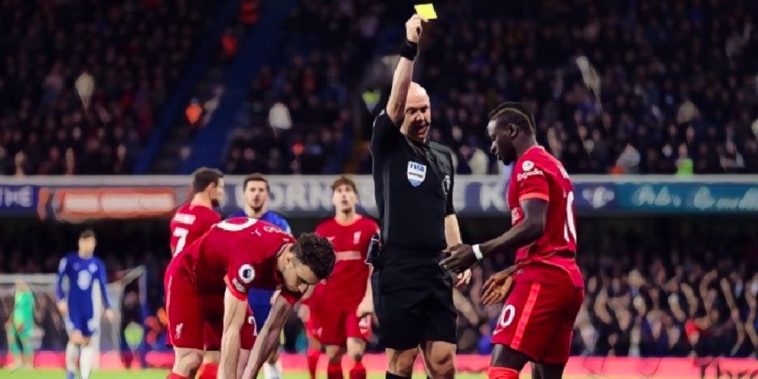 Thomas Tuchel believes Sadio Mane should have been sent off inside the opening minute of Chelsea’s thrilling 2-2 draw with Liverpool at Stamford Bridge.

Mane was cautioned after just six seconds after catching Cesar Azpilicueta with a wayward arm, with the Senegalese forward later opening the scoring in a breathless first half of action.

Chelsea fought back from two goals down in a brilliant Premier League clash, the opening exchanges played at a frenetic pace as the two sides shared four goals in a result that does little to improve either’s fading title hopes.

The opening exchanges were littered with individual mistakes in what was a nervy start, with Mane – having escaped a more severe punishment following his early booking – capitalising on Trevoh Chalobah’s error to open the scoring.

Mohamed Salah doubled Liverpool‘s advantage with a superb second, before Chelsea roared back to level before the break.

Mateo Kovacic’s sublime volley from outside the area reduced the deficit and Christian Pulisic brought the sides level after racing in behind to fire beyond stand-in Reds goalkeeper Caoimhin Kelleher.

Both sides had chances to win it in the second period, but neither were able to find a breakthrough in a result that hands Manchester City a significant advantage in the Premier League title race.

Tuchel was critical of referee Anthony Taylor following the clash and questioned the decision not to show Mane an early red card.

“If you remember the first game with the same referee and how quick it was to give a red card to us, I am not a friend of early red cards,” he told Sky Sports News.

“I hate to say it because I love Mane and he is a nice guy and top player, but it is a red card. The elbow is in the face – it doesn’t matter if you do this after 20 seconds or 20 minutes.”

Tuchel spoke further on the clash and was delighted with his side’s character in fighting back from two goals down, admitting the game proved a ‘brilliant’ spectacle.

“Brilliant match of football, everybody not in the stadium missed something – energy, some mistakes. We started excellently and were 1-0 down out of nothing because we did two or three big mistakes, then we concede a second one which makes the task very hard.

“The team did not give in and Mateo Kovacic’s goal brought the belief back into the stadium. There was almost the perfect comeback in the first half with a third goal on the transition.”

Romelu Lukaku was a notable omission from the Chelsea squad following the fall-out surrounding his controversial interview with Sky Sports Italia, though Tuchel suggested ‘there is always a way back’ into his plans for the forward.

“He is our player, there is always a way back, we will clear this behind closed doors and once we have made a decision and Romelu knows, you will maybe know also. It is not to be discussed now.”

Chelsea remain second in the Premier League, though the draw leaves the west Londoners 10 points adrift of league leaders Manchester City. Tuchel’s side next face Tottenham in the Carabao Cup semi-finals on Wednesday evening.