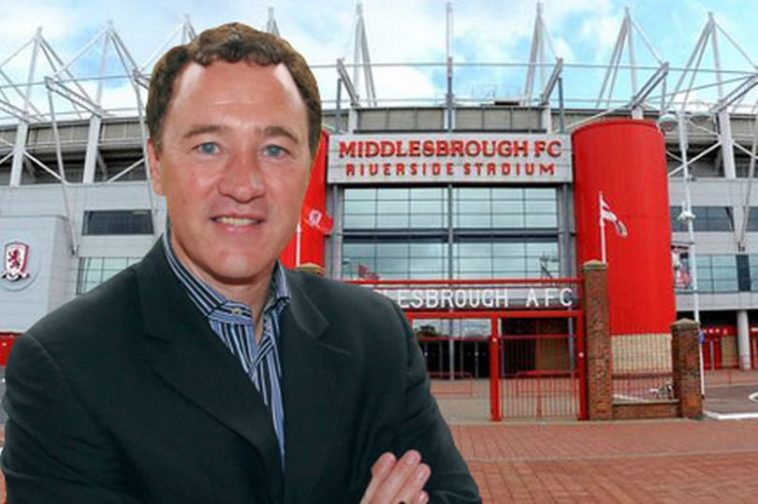 Any Middlesbrough fan, young or old, will know that Steve Gibson played a huge role in ensuring that the club didn’t descend into the footballing abyss in 1986, going out of business and leaving Teesside without a professional football team. So is it fair to criticise him now?

Sure, there may have been a team set up in its memory, an ‘AFC Middlesbrough’ if you like. But only now would they be anywhere near something like league football, providing it managed to stay the course…of course.

He’s quite rightly lauded as a hero amongst the fans, with banners and chants dedicated to him. You’d have to say there aren’t many other clubs in the land whose fans are so loyal to their chairman.

Steve Gibson is something of a rarity these days. In these times of social media, egotistical owners with too much to say, and foreign owners not always doing what they promised at the outset, the sea change in football ownership has been remarkable. Gibson has stayed consistent.

Gibson doesn’t hog the limelight or argue with fans on Twitter or Facebook. He doesn’t hire and fire on an almost bi-annual basis. He doesn’t put managers under pressure with unrealistic demands. In short, he’s every football clubs dream owner.

As well as his club-saving actions back in 86’, it’s his continued financial backing, sometimes out of his own pocket, that leaves Boro fans in total awe of their owner. After all, he’s one of their own, a fan, passionate about what happens to his club. This explains his sheer commitment to the Boro cause.

For a prolonged period of time, in the clubs Championship day’s not so long back, he was pumping in around £1m of his own cash every month just to keep the club afloat. Those sorts of stories serve as a perfect example as to why he’s almost off limits when it comes to criticism. Well, almost.

This season for Boro has been a rollercoaster of emotions (nothing new there – long suffering fans will tell you that). The highs of returning to football’s top table. The potential for heady heights once more. Fans dreaming of big-name signings. After we clinched promotion fans were allowed to dream higher still as Gibson was quoted as saying;

“We’ve got to have a go. We’re a sporting entity and if you’re not going to be having a go you shouldn’t be doing it.”

On this seasons showing though you could argue they simply haven’t ‘had a go’. A summers transfer activity saw some good money spent, seemingly backing up the chairman’s words. Victor Valdes, Álvaro Negredo & Calum Chambers were the stand out names. There was also the club record £12m signing Marten De Roon as well a promising Danish International Viktor Fischer among others.

But it’s the January window that’s left many a fan scratching their heads in bewilderment.

At a time when the club was suffering its almost annual post-Christmas slump, it was the ideal time to bring in reinforcements. Yet, they didn’t come – well not in the form of what Aitor Karanka expected.

His pursuit of Jese Rodriguez, Bojan and Robert Snodgrass came to nothing. Instead, Rudy Gestede, Adlene Guedioura and a returning Patrick Bamford arrived. Now you could argue it was down to the likes of Jese showing no interest in joining Boro, yet Karanka had plenty to say on who he thought was responsible.

Aiming barbs at the recruitment team, as well as the board, he was outspoken in his press conferences. Could Gibson and Co. have been more supportive, more ambitious? Some fans certainly think so. Karanka definitely thought so!

In the week leading up to Boro’s game against Man United, Karanka left. It was a mutual decision according to Gibson, with Karanka “sacrificing” himself for the good of the club and its chances of survival. Whilst satisfying some supporters who felt the Spaniard had outstayed his welcome, it’s the timing of his departure that’s been criticised in some quarters.

Fans have questioned whether the conversation with Karanka should’ve been had earlier? Could it have happened in January when a new manager could’ve made improvements? Was he too slow to react to an alarming fall down the table and subsequent drop into the bottom 3?

It’s been levelled at him by certain sections of the support that it’s a change too late. Any manager coming would have little or no chance to arrest the slide. A manager did come in; however they weren’t exactly what the majority of fans had in mind.

Steve Agnew, it would appear, has been given the rest of the season to get Boro out of the mess they currently find themselves in. As a sort of lengthy job interview, he’s effectively got from now until the end of the season to stake his claim for the job. Gibson has stated he hopes Agnew is still around “this time next year”, a clear indication of what his thoughts are.

For some, it’s an uninspiring appointment, and with the likes of Jonathon Woodgate on the coaching staff too now, many are questioning Gibson’s judgement. Gibson openly admitted;

“My phone hasn’t stopped. I’ve had agents offering me obscure individuals and I’ve had some surprises too”.

The “surprises” alluded to by Gibson would suggest perhaps managers of a high standard have been touted. So why he would seemingly settle for a coach with little or no experience as a main man, especially when there are others out there with arguably more experience.

The Woodgate appointment has drawn a “jobs for the boys” conclusion from some who feel it’s a mistake that’s been made in the past (think Viv Anderson, Gordon McQueen in the days of Bryan Robson – or more recently when Gareth Southgate was given the lead role).

Fans were hoping for such names as Guus Hiddink, Claudio Ranieri and Harry Redknapp among others. Big names, maybe considered a little out of reach, but not an issue for a chairman whose ambition has seen many a big name come through doors at The Riverside in years gone by.

Lacking in ambition then is not something you’d really associate with Gibson, but for some that’s exactly what Agnew’s appointment represents, as well as imagination.

Is he settling for the easy option? Is he accepting that relegation is inevitable and installing Agnew to guide the team next time out? It’s perhaps a little unfair on the former No.2 who will no doubt be doing all he can to turn things around.

Is it just because he’s not a ‘sexy name’ perhaps?

Whatever Gibson’s motives behind the decision you’d be hard pressed to find a fan, no matter what their view on his appointment might be, that doesn’t believe he acted in what he feels are the best interests of the Club.

It’s perhaps a tad controversial then to even raise the point on whether Gibson is culpable, in part, for the team’s fortunes this season. To suggest so will most likely draw outrage from most fans considering his well documented history. However given the views from fans out there, it’s clearly something that’s being debated right now.

Time will tell if the perceived lack of ambition in both the January Transfer Window and the managerial change will come back to haunt Steve Gibson. You suspect that if he feels any mistakes have been made he’ll come out and admit them. After all, he was quick to take the blame for Gordon Strachan’s ill-fated reign, as well acknowledging Southgate was maybe a little wet behind the ears when asking him to jump from Club Captain to manager.

What you can guarantee is that whatever division Middlesbrough find themselves in next season, the man tasked with leading the team will be backed to the hilt by a loyal and patient chairman.

Good points well argued Ian. Always been a fan of Steve Gibson and having met him a few times he seems to be the genuine person you think him to be. Thanks to him we have a club to support…through thick and thin it has to be said but then as you pointed out that is a scenario we Biro fans are well used to!

Anybody wanting a change at the top needs to be careful what they are wishing for. Any international investors will care nothing for the spirit of the Club and will only want what they can get out of it. The only criticism in my view that can be levelled at Mr Gibson is that at times he has proved to be too loyal with his managers. Had AK been allowed to leave after the Charlton debacle things could well have turned out very differently.
However if being an overly loyal Chairman is his greatest crime then I’ll take it.

Unfortunately Mr Gibson made the ultimate mistake when Steve McLaren left to take the England job in 2006. The club were in a pretty good place back then having competing in Europe and finishing 14th in the premiership. As a businessman Mr Gibson should have made an investment in a proven and experienced European manager. He needed to keep the club at a level what they had fought hard to achieve. Instead he took a gamble and Middlesbrough FC have not sustained a level competitiveness ever since.

Im sorry to say we have a chairman who will not learn from the past hesitation in football will only spell Desaster kk should of gone in January to allow the damage to be turned around with a proven manager with a good pedigree in football man managent , proplems behind the scenes with players not happy a good manager with these skills would of ironed all the problems out it was obvious now kk could not achieve this .in my view it’s to little to late Mr gibson and it’s the fans who suffer again and again. Middlesbrough yo yo FC springs to mind .p’s football is not just about money it’s all about judgment and reactions to situations that go on around you and how you react to them .Mr gibson wake up and smell the coffee sooner utb