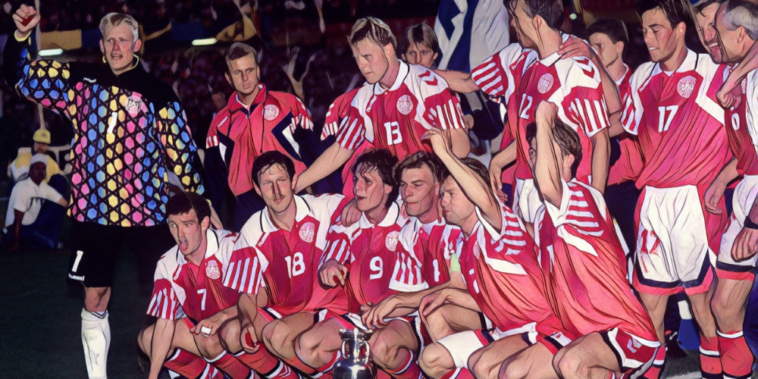 It is grossly unfair that Brian Laudrup will forever be cast ever-so-slightly in the shadow of his elder sibling, Michael.

The former Brondby, Bayern Munich and Rangers playmaker was a magnificent talent in his own right, winning a Champions League and being voted Danish Footballer of the Year on four occasions. With a drop of the shoulder and a surprising turn of pace he would glide past opponents and what followed next was always elegant and erudite. A sumptuous pass to feet. An artful through ball. Perhaps a shot tempered for accuracy.

Truly Brian Laudrup was a composer of beautiful football. It’s just a shame that his big brother was Mozart.

Yet in 1992 the supposedly lesser of these Scandinavian luminaries took centre stage and achieved something that was beyond even the majestic Michael. Along with Peter Schmeichel, and a rollcall of players whose names are familiar even if other details are sketchy, he helped pull off a bona fide sporting miracle.

Helped? That doesn’t quite cut it. Brian was instrumental in Denmark winning Euro ’92 against all the odds and despite the nation only gaining entry to the tournament with a week to spare. He ran every show; inspiring and creating; tormenting the continent’s best and all while giving this extraordinary underdog tale a good touch of class. Ultimately, as well as lifting the trophy he – again, along with Schmeichel – secured a spot in UEFA’s Team of the Tournament.

But before we revisit the Dane’s ‘Miracle of ‘92’ we must first go back two years to a real low-point, one that’s formative and important.

The famed ‘Danish Dynamite’ side that had lit up the World Cup in 1986 with their swashbuckling swagger and cool-as-f*** Hummel kit, was sadly on the wane in 1990. The retirement of some key personnel partly explained their decline as too did an unpopular managerial appointment that divided the squad with arch-pragmatist Richard Neilsen taking on the reins. Neilsen was respected certainly but his relative success at club level was attained via an ultra-defensive approach that contrasted sharply with the adventurous philosophy that preceded it. It looked an odd fit.

And indeed it was, at first at least, because it only took a few games in charge overseeing cautionary fare before the Laudrup brothers both quit international football for good in protest, aged just 26 and 21 respectively. This small country, with a population of five million, had lost their only two world class talents.

To the Dane’s immense credit, they still managed to give a good account of themselves in the subsequent Euro qualifiers, finishing second behind a brilliant Yugoslavia side and from these encouraging showings – that included a hard-fought win in Belgrade with a performance from Schmeichel that elevated him into the Laudrup’s stratosphere – optimism tentatively returned, sufficient for the Danish FA to offer an olive branch to the brothers, as a World Cup qualifying campaign beckoned.

In February 1992, Brian Laudrup agreed to come back. Michael, for his part, declined.

Which is why, when the late call unexpectedly came that summer for Denmark to participate in the Euros, as Yugoslavia were omitted due to a vicious outbreak of civil war, only one of their sibling superstars was present. In the event, one was all they needed.

It has often been said that the players were ‘on the beach’ when they were informed of their inclusion but in fact the squad were readying themselves for a friendly with Russia. But if this plays down the myth that they were unfit it doesn’t diminish how woefully under-prepared they were. Every other participant had several months to select their squads, organise hotels and training camps, and focus on their opening opponent’s weaknesses and strengths. Denmark had precisely six days.

With all this in mind, it was a significant blessing that the tournament was held just across the border in Sweden and it absolutely helped that the Danes went into the competition with a nothing-to-lose attitude. Logically, such a laissez faire mentality should have undermined Neilsen’s well-drilled regimen but if anything the reverse was true: the two conflicting approaches dove-tailed, meaning Denmark was organised and hard to break down but spared of suffocating pressure.

In their opening game against well-fancied England the red-and-white Dynamite considered themselves unfortunate to emerge with just a draw and they were the better team too when succumbing 1-0 to Sweden. These results meant their final group match against France was a must-win and really nobody gave them a chance, least of all their opponents who had the temerity to ask that the Danes go easy in their challenges so as to avoid injuries for the semi-final ahead. French arrogance motivated Denmark to a 2-1 victory.

A classic ensued in the semis, as Holland – Van Basten, Gullit and all – were taken to pens. Denmark slotted home all five of theirs. They had nothing to lose.

Throughout all the aforementioned games Laudrup shone; bewitching and effervescent; the solitary gleaming jewel in a robust crown, and if you need evidence of how this far-fetched tournament win felt fated consider his only substitution against France. Brought off in the 78th minute due to exhaustion, his replacement Lars Elstrup duly came on and scored the winner with his very first touch.

So we arrive at the final, with Germany as cock-sure as the French had been and not too bothered about hiding it. A rare strike by John Jensen wobbled their conviction before Kim Vilfort settled matters late on, the midfielder having returned to the Danish camp just days earlier after travelling home to care for his terminally sick child.

In all it was a fairy-tale, one that easily compares with Greece’s triumph 12 years later only this one was written in the spirit of Hans Christian Andersen. And at the heart of everything, being all that was good and aesthetically uplifting about this unlikeliest of yarns, was a player who for one memorable summer stepped out of his brother’s shadow, and into the searing sunshine.

Read – Ranking the 10 best Premier League players of the 2010s