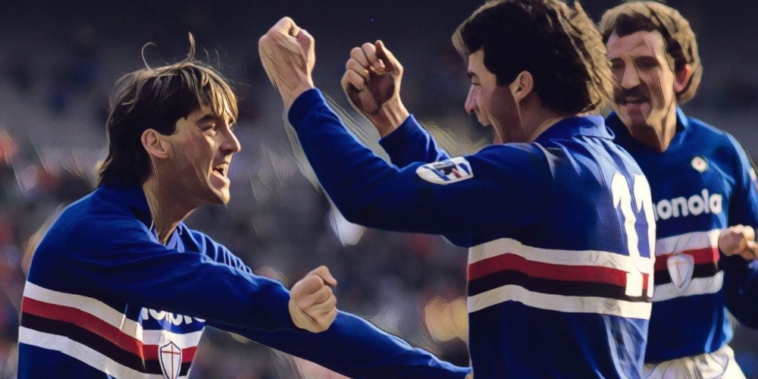 For four decades Roberto Mancini and Gianluca Vialli have been synonymous with one another. Friends, teammates, and a duo that have worked in tantalising tandem for both club and country.

In an era in which Serie A boasted the best of the best, Mancini and Vialli were the devastating duo who transformed Sampdoria from nearly-men into genuine challengers for cups and championships.

Sampdoria had never won a major trophy before the arrival of Mancini in Genoa, the smooth and silky fantasista who chose Il Doria over Italian football’s traditional giants and led the side to a golden period of silverware success.

Sampdoria’s side of the late eighties and early nineties was full of potential, but it was the x-factor provided by Mancini and Vialli that ensured talent turned into trophies.

The two had first met in the Italian u21 side. Mancini had earlier made his Serie A debut as a 16-year-old for Bologna, where a nine-goal return in his debut season sparked a scramble for his services – a race that was won by Sampdoria who completed a £2.2m deal.

Arriving in 1982, he was joined two seasons later by Vialli, having regularly tried to tempt his close friend into making the move to an ambitious outfit.

Vialli’s route to the top had began in the lower divisions of Italy’s football pyramid, but after racking up over a century of appearances for Cremonese and forming part of the team that won promotion from the third tier to Serie A, interest arrived.

He too chose Sampdoria and it was the birth of a beautiful partnership between two future Italian icons.

Separated in age by little more than four months, their bond was one of closeness off the pitch and an almost telepathic understanding on it.

Their first season together saw Sampdoria win the Coppa Italia for the first time, a maiden major trophy for the club, in addition to securing a fourth-place finish in Serie A.

It was Vialli and Mancini who did the damage in the second leg of the final win over Milan. The latter opened the scoring from the spot, before Vialli’s fine footwork left Sergio Battistini in a heap as he worked an angle to fire home.

The departures of Sampdoria’s foreign contingent – including Trevor Francis and Graeme Souness – saw the strike duo shoulder increased responsibility, with the pair sharing the club’s leading scorer accolade for the next eight seasons in succession.

Sampdoria had shown signs of progress up until that point, but their ambitious project reached new levels following the arrival of Vujadin Boškov as manager.

Utilising the clinical combination he inherited, he led Sampdoria to back-to-back Coppa Italia triumphs in 1988 and 1989 as the Serie A side became a force in cup competition.

Growing in belief and with a visible unity when stepping onto the pitch, success followed on the continent as Sampdoria won the UEFA Cup Winners’ Cup the following season, Vialli scoring twice as Anderlecht were beaten 2-0 in Gothenburg.

Sampdoria had reached the final the previous season before losing to Barcelona, but it was second time lucky as Vialli’s brace brought further honours to Genoa.

His first was an ugly scrambled effort from a rebound, before heading home an inviting cross – predictably arriving from the boot of Mancini – to etch his side’s name on the trophy.

Mancini had emerged as the leader of the side, oozing class and composure, whilst the potency and sheer will-to-win of Vialli made them an often unstoppable combination.

With the likes of Attilio Lombardo and Gianluca Pagliuca adding further quality in key areas, Sampdoria had assembled one of the cult sides of the early decade.

For all their success, however, the best was still to come.

In a golden age for Italian football, the 1990/91 saw Sampdoria scale the Serie A mountain.

The competition was fierce. AC Milan had been crowned as European champions in each of the past two campaigns, whilst the Rossoneri’s city rivals, Inter, had a trio of Germany’s World Cup winners among their ranks. Diego Maradona remained Napoli’s irrepressible inspiration, having led his side to the Scudetto the previous season.

Even given that abundance of elite opponents, it was Sampdoria who emerged as champions for the first time in the club’s history.

Vialli bounced back from a difficult World Cup campaign to finish as the league’s leading scorer, netting 19 goals to win the Capocannoniere, with Mancini scoring 12 of his own as the two fired the club’s challenge.

Not before or since in the club’s 75-year history have l Doria been crowned champions of Italy, but with Vialli and Mancini in their ranks – leading from the front both literally and figuratively – Sampdoria claimed the 1991 Scudetto.

Juventus spent a world-record fee to prize Vialli from Sampdoria that summer, with the forward winning a second Serie A title and the Champions League during four successful seasons in Turin.

Mancini remained with Sampdoria and stayed until the end of the 1996/97 season, departing with a record of 168 goals in 566 appearances. It remains a club record, with Vialli’s 141 a close second.

The duo’s paths shared similarities in the following seasons, as Mancini won a second Serie A title of his own in different colours, forming part of Lazio’s victorious side in 2001.

There was later a reunion between the two at international level, as Mancini incorporated his old friend into the Azzurri set-up after taking charge of the Italian national side.

It was a welcome return for Vialli – who has battled pancreatic cancer in recent years – and with his long-term ally alongside him, Mancini led Italy to success at the 2020 European Championship.

Having inherited a side that had embarrassingly failed to qualify for the World Cup three years earlier, it was a triumph for Mancini and Italian football as the Azzurri defeated England at Wembley.

Overcoming the odds to win major trophies has become something of a habit for Sampdoria’s Goal Twins.