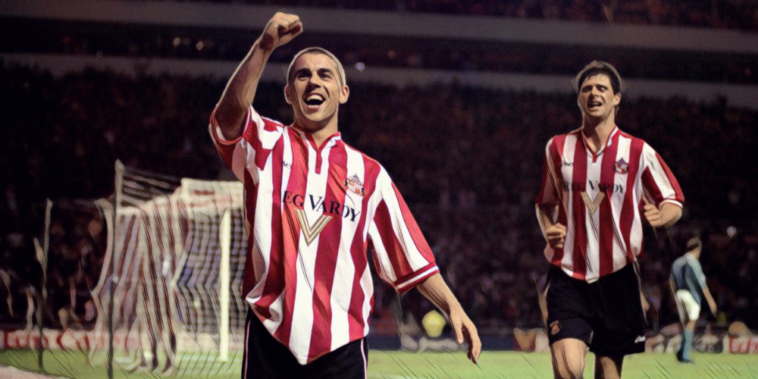 A reasonable argument can be made for Kevin Phillips being the most underrated British striker in the modern era, even if all the caveats that explain why his accomplishments are forever sold short are pretty reasonable too.

Those caveats in brief are these: That the sometimes-mustachioed striker’s peak coincided with a golden age of England forwards, namely Michael Owen, Alan Shearer, Les Ferdinand, Robbie Fowler, Emile Heskey, and just when the path cleared a little, along came a teenage Wayne Rooney.

Consequently, the former Watford, Sunderland and Southampton hitman only wore an England jersey on eight occasions, all of them friendlies.

Secondly, he was a former hitman for Watford, Sunderland and Southampton, as well as Aston Villa, West Brom and Birmingham until he gained journeyman status late in his career. At no point did Phillips light up Old Trafford, the Emirates or Anfield and though it shouldn’t matter that he never played for a top six side, in reality when it concerns legacy and wider recognition it matters greatly.

Lastly, and there really isn’t a nice way of saying this, but he never looked like an elite star, the calibre of which smiles on merchandise or down from posters. With a doggedly down-to-earth demeanour and the kind of face that appears on your shoulder when playing a pub fruit machine, telling you how to cheat it, Phillips distinctly lacked an aura. It should be said that Fowler lacked one too, but Fowler played for Liverpool.

Yet this ordinary man who played for ‘ordinary’ clubs scored 30 goals for the Mackems in 36 appearances at the turn of this century, making him the leading goalscorer across Europe.

Kevin Phillips was the #BPL top scorer in 1999/2000 with 30 goals for #SAFC – winning him the European Golden Shoe pic.twitter.com/1bIN4UCpvB

In total, he bagged 92 Premier League goals in 263 appearances, and the variety of them impresses as much as the number with headers, volleys, tap-ins, and artistically beautiful curlers into the far corner all in his wheelhouse.

Overall, Phillips boasted a shooting accuracy of 33% in the top-flight and even a novice statistician can work out that across several seasons, if he had three sights of goals he’d score from one of them. All these feats and all of these figures aren’t bad from a player who was a right-back aged 21, when turning out for Baldock Town in the Beazer Homes League.

Around the time that Phillips was thundering shots into non-league nets, after being transformed into a forward due to an injury crisis, Niall Quinn was coming to the end of a largely successful spell at Manchester City.

This was the mid-nineties and the towering Irishman was playing second fiddle to Uwe Rosler and Paul Walsh which was hard to take given that a couple of years earlier he’d been by some distance City’s best attacker. Under Peter Reid, a fruitful partnership had blossomed between Quinn and Adrian Heath, a classic ‘little and large’ pairing that so often reaped dividends for the Blues.

So, soon after, Quinn moved to Sunderland, to be reunited with Reid, and though things didn’t go according to plan at first, with relegation spiralling the Mackems down to the Championship, that summer Reid signed a little-known forward whose move to Watford had not quite worked out after being plucked from obscurity. A little-known forward with a down-to-earth demeanour.

In five seasons, the duo fired home a remarkable 185 goals for Sunderland, forging an attacking alliance that became feared by defenders great and good; forging a partnership that is namechecked today by one and all whenever talk turns to brilliant front twos.

Surprisingly, they never worked on their relationship in training – Phillips were merely informed early on to never stray more than 15 yards from his gangly consort – but perhaps there was no need to due to the simplicity of the ingredients.

Quinn was the targetman; Phillips was the finisher. A classic one-two.

A #PLMoment to remember for @SunderlandAFC, courtesy of Niall Quinn and Kevin Phillips 🔴⚪️ pic.twitter.com/C9iSlXrQtP

That is not to undermine their instincts, honed in the biggest games that wobbled the biggest reputations as one esteemed centre-back after another left the Stadium of Light destined to have nightmares about the devastating double act.

“Call it telepathy or whatever you like, we just clicked,” Phillips once said, on a strategy that regularly had Quinn flick the ball into his path, knowing exactly where his run would be without the aid of a rear-view mirror.

This was not the swishy sophistication of Bergkamp and Henry, collaborating their art. This was old-school and straightforward, exactly how Reid envisioned it when bringing them together and the last word should go to the manager whose prosaic methods often heralded mediocrity. But when his ways worked, they spoilt us with Niall Quinn and Kevin Phillips. A throwback front pairing who reminded us briefly on how things used to be and perhaps could be again.