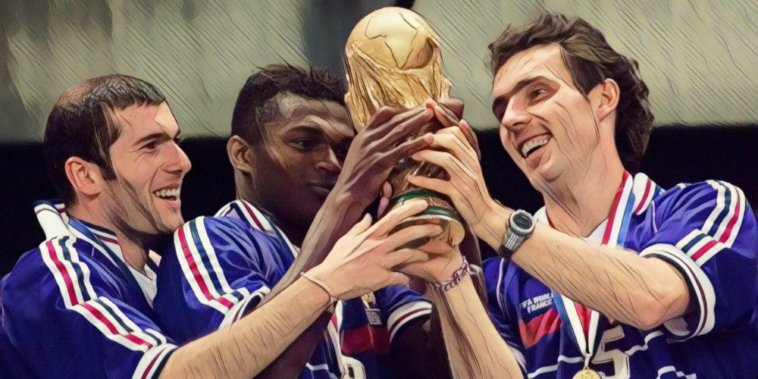 “He was a monster! Let me tell you, an absolute monster! He could play in defence or midfield, but I think he was better as a centre-back. In fact, I’m sure of that.”

As an ageing Laurent Blanc reflects on the career of his old partner in crime Marcel Desailly it’s easy to detect the fraternal respect in the timbre of his voice. Across a glittering international career together – spanning seven glory-filled years – the duo forged a formidable bond on the pitch, and became close friends off it.

Together, they were the wall of steel that dreamed of gold.

Former Montpellier defender Blanc first cut his teeth on the international stage when France manager Michel Platini handed the elegant defender his international bow in 1989. The 23-year-old went on to play a cameo role in World Cup 1990 qualification, but was powerless to help a weak French side who failed to qualify.

Blanc cemented his place in the team thereafter. The 1990 French Player of the Year played a key role in an impressive 19-game unbeaten streak that saw France ease to Euro 1992 qualification. Platini’s side were lauded as pre-tournament favourites, but were dumped out in the group stage by eventual winners Denmark.

The injection of French debutants included the Ghanaian-born Desailly.

After winning the Champions League with Marseille, the naturalised Frenchman made a high profile move to Italian giants AC Milan in the summer of 1993. Upon arriving at the San Siro manager Fabio Capello – struck by the 24-year-old’s technical ability – chose to mould him into a defensive midfielder.

Desailly rose to the challenge, becoming one of the outstanding midfielders in the most competitive league in Europe. He was an immovable force – a no-nonsense colossus who endeared himself to the Rossoneri faithful – promptly earning himself the nickname ‘The Rock’.

Despite his transformation under Capello, Desailly wasn’t convinced about his new position and neither was Houllier. In his first competitive start for Les Bleus – vs Sweden in August 1993 – the French manager deployed the Milanista at right-back, alongside Bixente Lizarazu, Alain Roche and Blanc.

Houllier failed to save Les Bleus’ doomed qualifying campaign and the French managerial carousel spun around once again. Though Houllier was sacked, and replaced by his assistant Aimé Jacquet, he wasn’t the sole casualty of the debacle.

In the aftermath of the failed campaign Blanc was vilified in the media, made a nation’s scapegoat overnight, resulting in the 29 year old prematurely calling time on his international career.

One of Jacquet’s first actions as incumbent manager was to visit Blanc at his home in St Etienne. Jacquet pleaded with him to return to the international fold, pitching his vision of an efficient zonal defence, with speed on the flanks to compensate for his ageing legs. Blanc bought into it – hook, line and sinker.

Blanc and Desailly flourished together as Les Bleus qualified for Euro ‘96 with relative ease. With their group opener against Romania looming, Jacquet tinkered with the team’s shape, deciding on a 4-5-1 formation due to a lack of quality strikers. Unbeknownst to him, he had landed on the system that would yield untold success.

With Desailly and Blanc operating as a duo, France coasted through the Euro 1996 group stage, reaching the semi-finals, before being knocked out by the Czech Republic. Les Bleus’ progress was significant – the emergence of the intriguing Blanc-Desailly partnership inspired a renewed sense of hope.

Laurent Blanc scores the decisive penalty in a shoot-out win over the Netherlands at EURO '96. pic.twitter.com/Ljw6gRNEpt

Desailly’s tenacity and athleticism was the perfect accompaniment to Blanc’s calculated, almost languid approach. The former bullied his opponents with raw power, while the latter completed countless interceptions thanks to his otherworldly clairvoyance.

Having settled on Lizarazu, Monaco defender Lilian Thuram and goalkeeper Fabien Barthez as the other members of his defensive unit, Jacquet now had a robust foundation for success.

In 1998, World Cup hosts France cruised through the group stage, winning all of their matches while conceding just once. However, it wasn’t all plain sailing. Les Bleus were in real danger of crashing out in the round of 16 against Paraguay, before Blanc produced his crowning moment in a French jersey.

With just six minutes remaining in extra-time against Paraguay, Blanc – nicknamed ‘Le Président’ for his goalscoring feats with Marseille – popped up to score the first-ever golden goal in World Cup history, sending his side into the quarter-finals.

Riding the wave of home support and championed by the luminous skills of Zinedine Zidane, Les Bleus swept aside Italy and Croatia en route to the final against Brazil – a meeting of the tournament’s tightest defence and most potent attack.

The French (minus a suspended Blanc) defended heroically throughout, absorbing Brazilian pressure and gradually wearing down their opponents. Les Bleus suffocated the South Americans, running out convincing 3-0 winners and hoisting the Jules Rimet trophy for the first time.

Desailly was singled out for high praise by his captain Didier Deschamps, who said, “Marcel has eliminated every thing from his game that he is not certain of succeeding in, he has developed a ‘no mistake’ technique. It has brought him to the summit of his powers.”

For all the Gallic flare of the past – the Platinis and Cantonas – this elusive victory was built on stoicism. Les Bleus conceded just twice in the tournament – a new record for a winner.

Following the triumph, Jacquet announced that he was leaving his post, citing the pressures of the job. His pragmatism had constructed one of the finest sides in the history of the game, and his exemplary work continued under his successor and former assistant Roger Lemerre.

At Euro 2000, Desailly and Blanc once again anchored the French back line, alongside Thuram and Lizarazu. Despite doubts about his age and lack of pace, Blanc proved himself reliable – scoring France’s first goal of the tournament against Denmark.

With Zidane at his resplendent best and the tried and tested French defence operating like clockwork, Les Bleus secured their second successive major international trophy – defeating Spain and Portugal en route to a dramatic golden-goal victory over the Azzurri in the final.

Following the example of his captain Didier Deschamps, Blanc announced his retirement from international football after the final. Desailly was made captain and went on to set the record number of caps (116) for a French international – before his record was eclipsed by Thuram in 2006.

So ended the Blanc-Desailly partnership, but their friendship endured long after they had hung up their boots.

Two of the most accomplished players in a golden generation, Blanc and Desailly redefined French football, initiating a shift from a long-held philosophy of entertainment above all else. The pair demonstrated that hard graft and organisation can be the springboard to expression, and success.