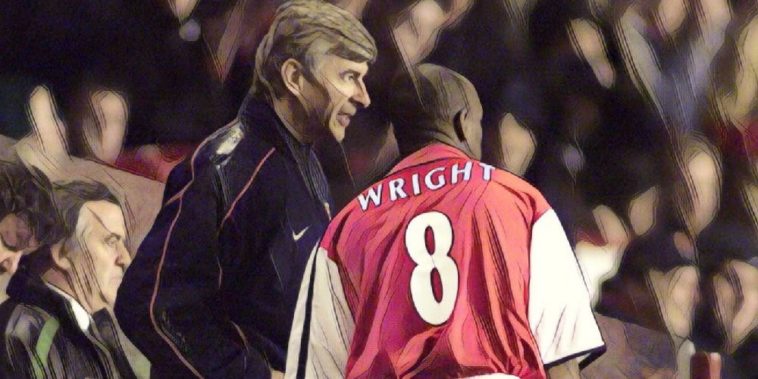 Ian Wright has opened up on the impact of Arsene Wenger and how the former Arsenal manager helped revolutionise English football.

Wenger arrived in the Premier League as a relative unknown during the nineties before overseeing a golden era in north London, spending over two decades at the club and guiding the Gunners to three league titles and a record-breaking seven FA Cups.

The Frenchman is widely recognised as being ahead of his time in terms of sports science and nutrition, and Wright has revealed the legendary manager’s methods that helped lead propel Arsenal to a wealth of major silverware.

“I remember the interview where he walks in and it’s the first time any of us have ever seen him, especially any of us,” he told the Match of the Day podcast.

Alan Shearer, who played came up against the finest teams of the Wenger era during his time at Newcastle, recalled being in awe of the Gunners’ fitness levels and physicality under the Frenchman.

“Wrighty, tell me, because there were so many times playing against those Arsenal teams over the years, certainly a year or two after he came in, I used to look at you and think, ‘How are you so fit? How are you so strong?’,” Shearer said.

“I used to think, ‘What are you guys on? What are you taking? How come… what’s happening here?’.”

Sports science is of course commonplace in the modern game, though Wright revealed the club’s old guard were initially dubious of the Frenchman’s revolutionary ideas, particularly about pre-season training: “You know what, Al? We used to have vitamin injections directly into us, into our arm, right into there, bam.

“We used to get sent to France, I used to have to do a session with a guy, I used to go there for two weeks because when you got to like 30 and older he was worried about how you were rehabilitating after you’d played games, how you’d recover.

“I used to have to go and see a guy, unfortunately he’s passed away, but it was like going to see Yoda. He’d do the fitness, he’d do the food for you. You’d go and train on the beach.

“That’s what Arsene Wenger did. He took you to a place where you had to be literally the best you could be. That’s what he did with us – the B6 tablets, the B12, the training.

“I remember when we started a pre-season. You know what pre-seasons were normally like: running you into the ground to the point where people are vomiting, and they’re saying, ‘Yeah, brilliant, that’s a good pre-season’. We’d literally hardly done anything to the point where Tony [Adams] and [Lee] Dixon had to say to him, ‘Boss, we just don’t feel fit enough’.

“He was absolutely right.”