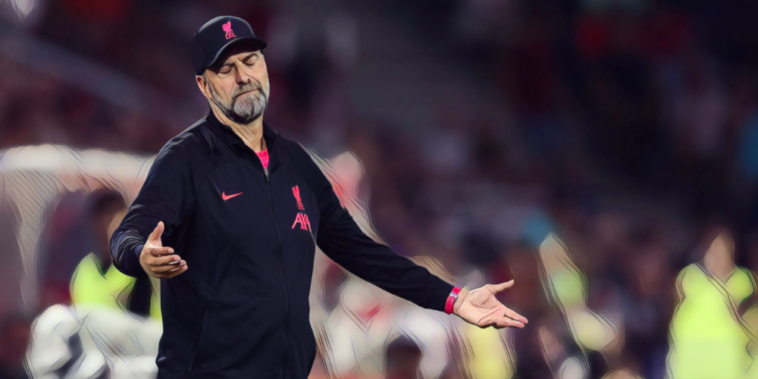 Jurgen Klopp has slammed the decision to host a winter World Cup and says the tournament is being held in Qatar ‘for the wrong reasons’.

Klopp is preparing his Liverpool side for the new Premier League season, with the Reds beginning their campaign with a trip to face Fulham at Craven Cottage on Saturday lunchtime.

The 2022/23 campaign will be unique for club sides however, with a winter World Cup set to bring a break to the Premier League season in November.

Liverpool’s campaign will pause following a home clash with Southampton on November 12 and resume on Boxing Day when the Reds travel to Aston Villa.

The trip to Villa Park comes just eight days after the World Cup final in Qatar and Klopp has blasted football’s authorities over the scheduling of the World Cup and criticised the physical demands that will be placed on players.

“The problem is the players who play the World Cup and it’s just not okay but it was decided a long time ago for everybody says the right reasons and that’s it. If you go to the final, or reach the semi-final then you are quite busy and then the rest starts a week later,” Klopp told his pre-match press conference.

“I was not angry at all before I came in but when we start talking about I get angry. My problem is as much as everyone knows it’s not right, nobody talks often enough about it so it will be changed. Something has to change.

”We should talk about it properly and say FIFA, UEFA, Premier League, FA, stop, start talking to each other. The most important part of the game is the players.

”Everyone has their own interest and that doesn’t make it easier and this World Cup happens in the wrong moment for the wrong reason but everything is fine.”