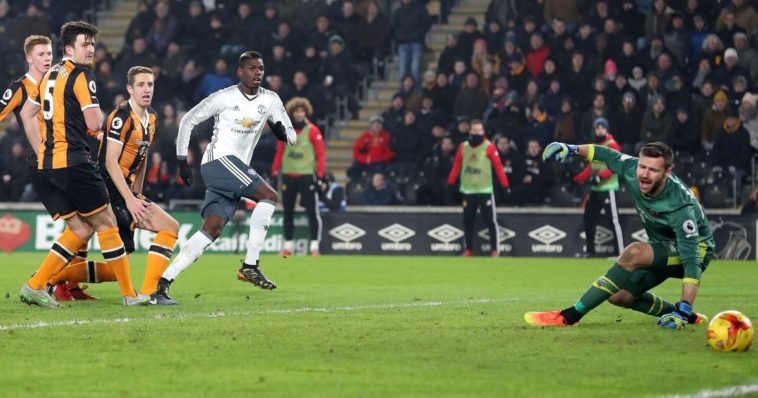 Manchester United shall return to Wembley Stadium as they secured a 3-2 aggregate victory over Hull City on Thursday night.Jose Mourinho’s side led 2-0 from the first leg, but Hull started quickly and managed to go into the half-time break 1-0 up on the night. United managed to restore their two-goal aggregate lead, only for Oumar Niasse to score late on – but it wasn’t enough in the end.

Before the game began, Hull players paid tribute to Ryan Mason who suffered a really serious injury last weekend versus Chelsea. He continues to recover and we at Football Faithful wish him the best and a quick recovery.

Hull began quickly as Harry Maguire, who was mightily impressive in both legs, and Sam Clucas both tested United’s defence with two shots at goal. Marcos Rojo then tried his luck with a shot which deflected wide for a corner.

26 minutes into the game and United hadn’t got going. Their fans were excellent though as the new song was sung for the majority of the first half. Although there were a lot of empty seats for the hosts, it didn’t prevent them from playing to their best. Applause swept round the stadium for Mason as Hull came close with a shot from Niasse.

However, frustration quickly turned into optimism as Hull were awarded a penalty in the 36th minute. Rojo was thought to have pushed Maguire in the box, leading to Jon Moss pointing to the spot. However, replays show that it was a really poor decision from the referee as the two Hull players clattered each other. Nevertheless, Tom Huddlestone perfectly placed his penalty in the bottom left corner to put Hull right back in the tie.

United improved slightly in the second half but never reached their revent high standards. A major talking point of the second half was a push on Chris Smalling by Huddlestone inside the Hull box. It seemed soft at the time, but what comes to mind is consistency from the referees. If the Hull penalty was given, then United should have had a penalty for that challenge – even if both seemed soft.

Not too much was occurring in the game, but United continued to knock on the hosts’ door, and drew level on the night as Pogba poked home from close range, as he picked up his 7th goal of the season. Impressive for a central midfielder with just under half the season to go.

United fans continued to be in full voice and out came the chant: ‘We’re the famous Man United and we’re going to Wembley’. They then went close to leading on the night as Rojo’s header cannoned of the crossbar.

However, Hull didn’t give up on the Wembley showdown and continued to push. They then hit the woodwork themselves as Niasse’s powerful header beat David de Gea but not the crossbar.

Hull eventually pulled one back to take the lead, as Niasse got the goal both he and Hull deserved. With five minutes of normal time remaining, the on loan Everton striker tapped in from close range in what was a good move from the hosts.

However, United held on to return to Wembley for the fourth time in the last nine months. They shall face Southampton who eased passed Liverpool to reach the final. Mourinho has his chance to win his first trophy for United, as Marco Silva will now focus everything on keeping Hull up, who have definitely improved in recent times under the Portuguese manager

Hull may have played well, but Manchester United weren’t at the races, read our opinion piece by our new Man Utd writer, Connor. Click here