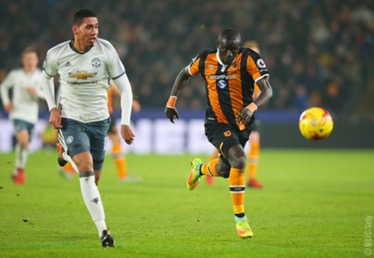 Jose Mourinho took his Manchester United side to the final of the EFL Cup, the semi final second leg against Hull City was alarming.

Despite reaching the final of the League Cup, one cannot help but be drawn to the performance and result of the second leg game against Hull.

It wasn’t until Paul Pogba scored Manchester United’s equaliser that you realised they had got off the team coach. Up until that moment Manchester United were passive, lightweight and frankly an absolute shambles all over the pitch.

A reaction was expected from Hull who had to recover a 2-0 deficit on aggregate but Manchester United totally rolled over for them for the entirety of the first half. Unable to impose themselves in the attacking third and looking incredibly vulnerable to a Hull strike force made up of Ommar Niasse and Adama Diamonde who had one goal between them this season before this game.

Kudos to Chris Smalling who played like Bambi on ice for making the Hull pair look like Ronaldo and Benzema. Chris Smalling’s defensive performance must be one of the worst individual performances for Manchester United in recent history. He was all at sea and certainly showed why he has been out of favour under Jose Mourinho this season.

The incredibly successful midfield trio of Pogba, Herrera and Carrick looked tired against Hull and perhaps shows that a bit of midfield rotation is needed in the coming weeks to get that freshness back.

Despite scoring, Paul Pogba was average at best and has seen a decline in his performances in recent games. He needs to get back to his best with that dominating strength and long range passing coming back into his game, you just feel perhaps he’s being cautious after his performance against Liverpool.

Of course, there is absolutely no reason to doubt Pogba, he is just having a bad patch after a confidence knocking performance against Liverpool.

For a player who has scored so many goals this season for Manchester United, sometimes you can’t even tell if he is on the pitch. It can be very frustrating when you see him strutting around the pitch but you just cannot doubt his record. When United need a goal he generally pops up with one.

Performances from Zlatan like his one against Hull are something that must be put up with at times because the man is an undoubted top class goal scorer who has been a talismanic figure upfront for United this season.

However, a problem such as Matteo Darmian can be solved quite easily, do not play him. Never in the recent history of the club have Manchester United had such an awful attacking full back who may as well not bother getting forward because he offers nothing. Even defensively he looks like he is chasing his own shadow the majority of the time.

A repeat of the performance against Hull simply cannot happen again. It was a performance of complacency that was incredibly disappointing. It is only masked by the fact United just about got themselves into next months final.

The performance that showed Jose Mourinho that certain players do not deserve to be starting for Manchester United after calamitous individual performances in this game. Jose Mourinho’s demeanour after the game showed that he was not happy at all shown in his 28 second post-game interview and it gives every confidence that he will not allow a repeat of that performance.