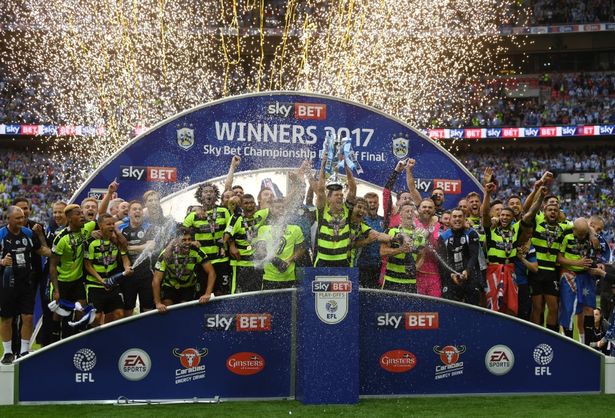 Huddersfield Town have achieved promotion to the Premier League. After 120 minutes, neither Reading or Huddersfield could be separated, thus the game was taken to a penalty shoot-out. Huddersfield won the shoot-out 4-3, as they clinched a place in the top-flight of English Football.

The first 45 minutes proved to be entertaining, despite neither side breaking the deadlock.

With just four minutes gone, Huddersfield Town threatened. Aaron Mooy delivered a dangerous free-kick, only for Michael Hefele to head wide. A glorious chance early on for the Terriers.

Then five minutes later Izzy Brown missed a sitter. After good work from Elias Kachunga down the right, Brown put his effort wide. Kachunga did well to create space and find the Chelsea loanee, who missed a sitter which would have given his side an early lead.

Just after 11 minutes, Lewis Grabban registered Reading’s first attempt on goal. However his effort was wide, a quick response from the Royals who did not look to lay down for Huddersfield.

The remaining half and hour of the first half was even. As both sides worked hard to create chances and contested strongly in all areas. However both sides could not find the decisive touch, which was beckoning for both, due to the nature of the contest.

The first-half ended goalless with both sides going into the break, following an evenly matched opening 45.

Straight from the restart, Huddersfield’s Chris Lowe had an effort at goal. However his shot was more than comfortable for Reading goalkeeper Ali-Al Habsi, encouraging signs for David Wagner, as the second 45 began. Following that effort, Reading immediately hit-back with George Evans seeing his shot saved by Huddersfield goalkeeper Danny Ward.

As the second-half progressed both sides were evidently fatigued. On the 56th minute Lewis Grabban managed to get in behind the Huddersfield back-line. However his chipped effort bounced wide.

With 15 minutes of normal time remaining, Collin Quaner scuffed his effort wide. The pull-back was aimed for Nakhi Wells, who was distraught that Quaner took the effort. If the ball had found Wells, he would have had the time and space to find the back of the net.

Huddersfield Town captain Tommy Smith was stretched off on the 87th minute. After a challenge by Yann Kermogrant, Smith stayed down. Therefore he was substituted for Martin Craine, as he could play no further part in the game.

Smith has been superb for Huddersfield this season. He shall be mightily gutted he could not see the game out.

After 90 minutes the scoreline remained goalless, as they headed for extra-time.

Now with 30 more minutes to play, both Huddersfield Town and Reading were feeling the fatigue. Evidently both sides were not flushed with energy, as they entered perhaps the biggest 30 minutes of their professional careers. One goal would have potentially decided the match.

The opening 10 minutes of extra-time were fairly slow in the early proceedings. Furthermore both sides appeared to be content on heading for penalties.

Reading had two great chances, as Gareth Mcleary should have made better upon his chances, towards the end of first-half in extra-time.

Then with only five minutes left of extra-time, Nakhi Wells’ effort flashed wide of the goal. A great chance to score, however he could not set himself the time and space.

Huddersfield scored four, missing just one. On the other hand Reading scored three, but missed two in the process.

Huddersfield Town manager David Wagner has instigated a remarkable job at the club. For the last few seasons, the Yorkshire side have been on the verge of relegation, however they are now mere months away from competing in the top-flight of English Football. A truly memorable footballing story has been written this season.

As for Reading and manager Jaap Stam, they shall feel disheartened after a solid campaign. In regards to the clubs takeover, Stam’s future is also unknown. The Royals will be looking to bounce back next season.

Now after half a century away from the top-flight of English Football, Huddersfield Town are back. The Premier League welcome the South-Yorkshire side in August. In addition to David Wagner, perhaps a new character for fans to sink their teeth into.