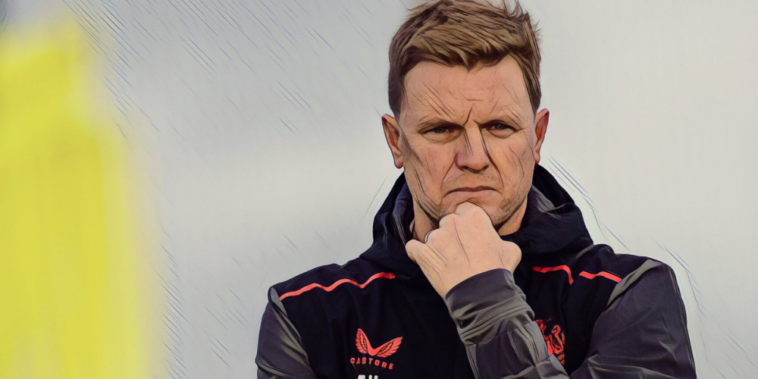 Eddie Howe says he is ‘looking forward’ to the challenge at Newcastle as he prepares for his first game in charge of the Magpies this weekend.

Howe will lead Newcastle for the first time as his new side take on Brentford in the Premier League, with the former Bournemouth boss having been named as Steve Bruce’s successor at St James’ Park.

The 43-year-old admits he is relishing the chance provided by the Magpies’ new ownership, but insists he is under ‘no illusions’ about the task of steering the club away from the relegation places.

“Tomorrow is a massive day for everybody connected with the football club. The supporters have shown how important it is, a sell-out.

“I’m sure the atmosphere will be a brilliant thing for me and my players to experience.

“I thank the supporters for everything they’ve done for me to this point, how welcome they’ve made us feel, me and my staff, and I just urge them to really try to help the team get a win tomorrow.”

Howe opened up on his preparations across the international break and has spoken on his desire to implement a ‘philosophy’ at Newcastle, hailing the initial response of the squad to his methods.

“Really good 10 days, thoroughly enjoyed it and the players have responded well,” he said.

“We have covered a lot and will try to implement philosophy in a steady way, and we definitely want to shape team in the way we want to go forward. I’ve been very impressed by the response and attitude of everybody.

“We planned very well, prior to me getting job. I have been preparing for this moment for a long time, as in my return to management to make sure that when I came in I was ready to go from day one and that’s served me well in this job.

You go in and you can implement your ideas straight away. I have slightly tweaked my philosophy from previous years because you have to evolve. We have covered a lot of bases and hopefully we have got the balance right.”