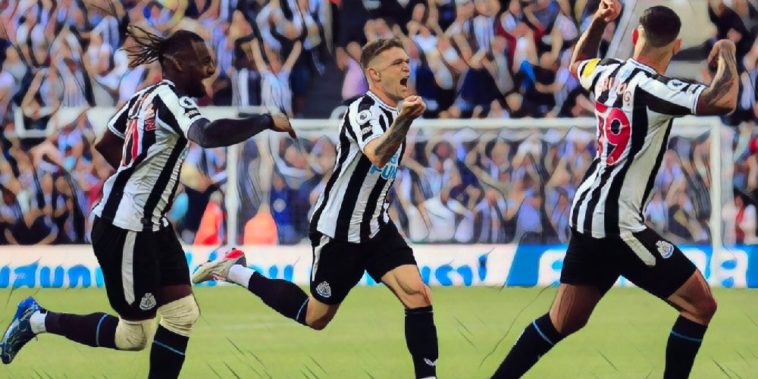 Right from kick-off things started to look ominous for Newcastle as Pep Guardiola’s Man City pinned the home side back and looked full of inventiveness. It was, therefore, no surprise when Ilkay Gundogan ghosted into the Newcastle area, calmly took down a Bernardo Silva cross and fired past Nick Pope after four minutes.

City continued to dominate and England international Pope would have to pull off a series of decent stops just to keep his side in the game.

However, the feel of the game would completely change after 17 minutes. It all began with Miguel Almiron firing wildly over from 12 yards out. Despite the disappointment of missing such a big opportunity, it seemed to galvanise Newcastle and, with the St James Park faithful behind them, they started to take the game to City and create chances.

Almiron would make amends for his earlier miss on 24 minutes when he managed to bundle home a cross from the lively Allan Saint-Maximin. Then on 39 minutes, the game would be well and truly turned on its head when Callum Wilson put the Magpies into a deserved lead. Saint-Maximin once again lead a purposeful counter-attack and when he laid the ball off to Wilson the 30-year-old striker expertly cut inside Ruben Dias and finished past the onrushing Ederson.

Five minutes into the second half and City were almost level, although Pope once again saved his side by pushing a powerful effort from Erling Haaland against the post.

A couple of minutes later and that Pope save would look even more important when Kieran Trippier stepped up and curled a sublime free-kick into the top corner of the Man City net.

City’s response was instant with a flurry of attacks ending with Haaland smashing a volley into the roof of the net just five minutes after Trippier’s free-kick.

Four minutes after that City would be level once again as Bernardo Silva latched onto a superb through ball by Kevin de Bruyne and slid a confident finish into the bottom corner.

More drama would follow when Trippier was shown a straight red for chopping down de Bruyne, although after reviewing the incident on the pitchside monitor, referee Jarred Gillett downgraded his decision down to a yellow.

City and to a lesser extent Newcastle both pushed on in search of a winner, but ultimately this brilliant game of football would end honours even.

Speaking afterwards Newcastle boss Eddie Howe praised his side for executing his gameplan and coming away from the game with an all-important point.

”We started poorly and we weren’t quite playing how we wanted to,” Howe told BBC Sport. ”Maybe the goal took the pressure off and then before half time we were excellent and we committed everything we had to the game and it’s a valuable point for us.

“You need the mentality first, the bravery and the willingness to take a risk. The alternative is to sit back and you think you are safe in numbers but you’re not. The players executed it brilliantly and some of our counter-attacking was a real threat.

“I’m very pleased to see Almiron score. He was excellent and his pre-season was good. A fitting reward for him.

“You need performances but you need the result at the end of the day so I’m pleased for the players we got something today.”