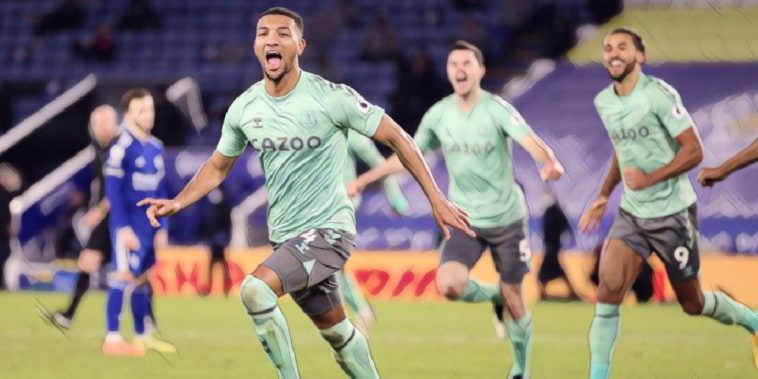 Everton defender Mason Holgate has insisted that his side still have a lot more work to do after the Toffees overpowered Leicester City to close the gap on the top four.

After a slight dip in form following their electric start to the season, Carlo Ancelotti’s side got back to winning ways at the weekend after a hard-fought victory over the Italian’s former club Chelsea, with a Gylfi Sigurdsson penalty enough to earn all three points.

While their opponents have been in superb form in the league this season and could have briefly gone top with a win, it was Ancelotti’s men who took the lead midway through the first-half, as Richarlison’s curling effort somehow found its way past ‘keeper Kasper Schmeichel, the Danish international getting a good hand to the ball yet failing to keep it out.

The hosts continued to threaten yet couldn’t quite find a way through, with Jamie Vardy missing a free header from close range, while James Maddison blazed over midway through the second half. The Foxes were made to pay for their wastefulness as Everton extended their lead, defender Mason Holgate the unlikely scorer after notching from close range after Schmeichel had saved Sigurdsson’s initial effort.

Brendan Rodgers’ side were then denied a route back into the game, with VAR overturning Lee Mason’s original penalty decision after Andre Gomes had brought down Leicester forward Ayoze Perez in the box.  The away side would go on to see out the rest of the game to take them up to fifth in the table, one point behind the Foxes, Holgate admitting that while his side weren’t exactly free-flowing on the ball, their defensive resilience was enough to get them a result.

“Off the back of two good results, we need to keep moving forward,” Holgate told evertonfc.com.

TWO for the Toffees! 🔵

“We’ve got two clean sheets in a row and we’re doing well. We still think we’ve got room to improve.

“We’re showing a side of our game which is to knuckle down, absorb pressure and not concede goals or chances. That’s a real positive for us. Leicester are near the top of the league for a reason.

“I don’t think we did the best we could have on the ball. We all know that.

“But it’s not always about that – sometimes it’s about the fight we’ve got and digging in and getting a result. It’s a real positive for us.”

The Toffees now have back-to-back Premier League wins after recovering from a real wobble in recent months and the centre-back insisted that his side need to be consistent in their performances.

“It’s important to not get too high with these results or too low when we don’t win,” Holgate added.

“We know the type of quality we have in the squad and it’s about showing that.

“It’s about consistently delivering a level of performance and that’s what we’re trying to do.”

Everton are up against Arsenal in the Premier League on Saturday.