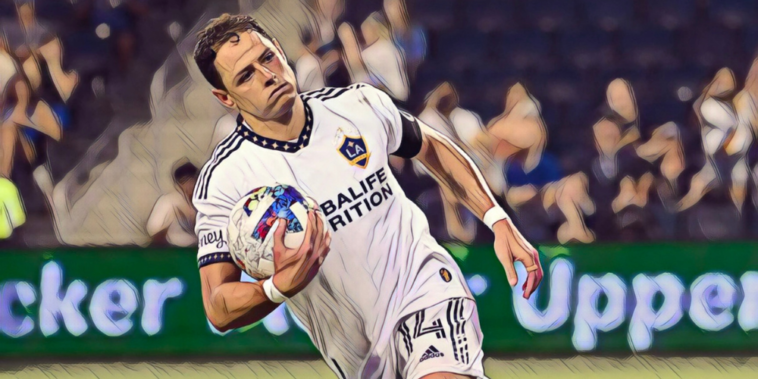 Javier Hernandez has admitted he would ‘play for free’ if Manchester United came calling to re-sign the forward.

Hernandez was a popular figure across his five seasons with the Red Devils, a period which saw the Mexican win two Premier League titles and score 59 goals in 157 appearances across all competitions.

The 34-year-old is currently in MLS at LA Galaxy, where he has scored 27 goals across the past two seasons.

Hernandez has been keeping a close eye on his former side, who are in the market for cut-price reinforcements at centre-forward, and admits he would return to United ‘for free’ given his love for the club.

“But I also want to be very respectful to my club. I am playing very consistently and in my mind my conviction is all about winning a championship with LA Galaxy.

“In the future, if things happen then they happen – but in my mind I am 100 percent with LA.”

Hernandez discussed the decline of the Red Devils across the past decade and recent appointment of Erik ten Hag as manager.

The Mexico international admits that Sir Alex Ferguson has been an impossible act to follow in recent seasons, with a number of managers having tried and failed to return the side to former glories.

“Would we like to have someone similar? Yes, yes, yes. But Sir Alex has gone and it is never going to be the same,” Hernandez said.

“It doesn’t surprise me what has happened at United because in life it’s not easy having a manager for 26 years in the way that Sir Alex did it.

“One of his greatest aptitudes, in my humble opinion, was that probably seven out of 10 players who signed for United worked out.

“That’s not easy, man – not for Real Madrid or Barcelona or even for Chelsea, (Manchester) City, Liverpool or Bayern Munich.

“It is like winning the lottery. Do you think anyone you hire afterwards is going to be able to do even 80 percent of what Ferguson did?”

Hernandez believes a lack of Champions League football has also contributed to the club’s struggles and compared the Red Devils’ current situation to that of Liverpool a decade ago.

The Mexican admits he understands Cristiano Ronaldo’s desire to leave this summer, but believes the 37-year-old could make a huge contribution if he remains at Old Trafford.

“The problem is that the other difficulty is that United are not in the Champions League, so some players aren’t going to come.

“Of course, some players will always want to come to Manchester United. [But] If another club can offer Champions League then who do you choose? You choose the best club for your career.

“United are now in the same process that Liverpool was in when I was in England.

“So I understand what is happening with Ronaldo. Time will tell what is going to happen with him – but what if Ronaldo stays and scores 40 goals? That could happen.”