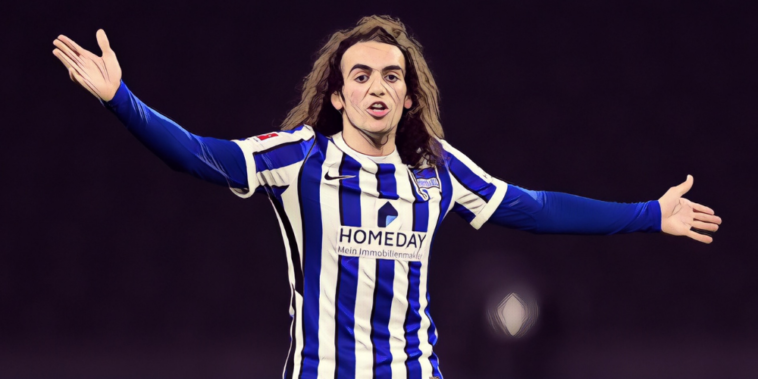 Matteo Guendouzi has discussed his Arsenal future ahead of a ‘decisive’ summer in his career, having spent the 2020/21 season on loan at Hertha Berlin.

Guendouzi was allowed to leave the north London side on loan last summer in search of regular first-team football, the midfielder having fallen out of favour under Mikel Arteta amid concerns over the player’s attitude.

The 21-year-old did not feature following the Gunners’ defeat at Brighton in June, a fixture which saw Guendouzi clash with several Seagulls players – most notably Neil Maupay – in a confrontation following the full-time whistle.

The midfielder was this week named as captain of France’s U21 side ahead of the upcoming European Championships and has been discussing his long-term future following a season in Germany that has delivered 19 Bundesliga appearances to date.

Guendouzi insists his he still could have a future at Arsenal and says this summer will prove ‘decisive’ in his bid to force his way back into the picture at the Emirates.

“No [my Arsenal career is not over], not at all. Now, I am focused on my season with Hertha Berlin,” he told France Football.

“Next, we will have a sit down with my entourage and people at the club to think and discuss the future. I am still an Arsenal player. This summer will be a decisive moment.”

Guendouzi has less than 18 months remaining on his current contract at Arsenal and faces a fight to convince Arteta he can be a part of the club’s long-term plans, though the youngster outlined his belief that he can regain favour under the Spaniard.

“Yes, of course. I belong to Arsenal for another year,” he said.

“I am here [at Hertha Berlin] to improve. From the moment that I am playing for Arsenal, I will give everything for this club, for the fans, for the team, for the staff.

“I will work hard for the shirt as I have always done.”