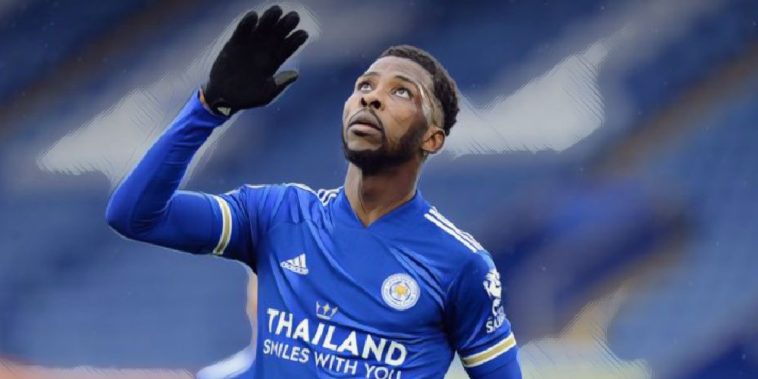 Arsenal completed a turnaround to secure north London derby victory in the headline result of the Premier League’s weekend action, a round of fixtures that saw several sides stumble in the race to secure Champions League football.

One side who continues to remain consistent is runaway leaders Manchester City, the champions-elect winning at Fulham to maintain their significant advantage at the top.

Elsewhere Manchester United ensured David Moyes’ latest return to Old Trafford ended in defeat, whilst a hat-trick hero inspired Leicester to a 5-0 thrashing of a struggling Sheffield United side.

It’s that time of the week again where we compile our dream XI from the latest action, here is The Football Faithful Premier League Team of the Week:

Chelsea‘s unbeaten run under Thomas Tuchel continued this weekend with a goalless draw at Leeds, their third stalemate since the German’s arrival as head coach in January.

It’s now eight clean sheets in just 10 league fixtures under Tuchel, though the west London side had Edouard Mendy to thank for securing a point at Leeds in a fixture which saw both goalkeepers excel.

The Senegal international enjoyed a busier afternoon that he has become accustomed to in recent weeks but showed his quality when called upon, tipping Tyler Roberts’ curling effort onto the crossbar in the first half before making a superb save to deny Raphinha in the second.

Edouard Mendy for Chelsea this season:

Leeds’ Illan Meslier – who made eight saves at the opposite end – also deserves a mention.

Joao Cancelo has been arguably the best full-back in the division this season and was once again influential as Manchester City won 3-0 at Fulham, the league leader’s change to a back three allowing the 26-year-old even greater freedom at wing-back.

Cancelo pushed forward dangerously and his speed and crossing ability were evident throughout, including a fine delivery for John Stones’ opening goal at Craven Cottage.

With Kevin De Bruyne an unused substitute, Cancelo took on the creative responsibility for Pep Guardiola’s side and finished the clash with two key passes and an assist, though never neglected his defensive task and finished the game with seven tackles.

John Stones superb season continues to go from strength to strength, the centre-back again amongst Manchester City’s key performers as the league leaders maintained their advantage at the summit.

Stones renaissance has been well-documented and the 26-year-old has arguably been City’s most important defender since the turn of the new year, his goal at Fulham remarkably his fourth in the Premier League in 2021.

That return is more than the likes of Dominic Calvert-Lewin, Marcus Rashford and Son Heung-Min, Stones’ fantastic performances showing no signs of stopping with the defender also stepping forward confidently despite the formation change for Pep Guardiola’s side at Craven Cottage.

Brighton took a huge step towards safety this weekend by beating Southampton at St Mary’s, a 2-1 victory providing Graham Potter’s side with some much-needed breathing space from the bottom three.

It was club captain Lewis Dunk who helped his side on the way to three points with a magnificent header to open the scoring, powering home Pascal Gross corner for his fourth goal of the season.

Dunk’s goal means he is now the leading scorer amongst defenders since the start of last season, whilst no defender has now netted more since the centre-back’s Premier League debut in 2017.

The 29-year-old will be disappointed not to have got more on his clearance in the build-up to Che Adams’ equaliser, but he was otherwise commanding and helped lead his side to what could prove a vital three points.

Arsenal secured bragging rights in the north London derby after coming from behind to beat Tottenham at the Emirates, Mikel Arteta’s side completing a turnaround to keep their hopes of securing European football alive.

In the midst of an entertaining derby clash was a fine performance from the ever-reliable Kieran Tierney, who nullified the threat of Gareth Bale and was an all-action presence at both ends of the pitch.

Tierney finished the game with nine duels won, seven crosses and a leading six tackles, whilst he showcased his attacking threat by breezing past Matt Doherty to assist Martin Odegaard’s equaliser for the Gunners.

The 23-year-old has become a hugely popular figure at Arsenal and continues to enhance his reputation as one of the division’s leading left-backs, his forward runs a major asset to his side’s attacking threat.

Burnley moved further clear of danger and put the brakes on Everton’s top four push this weekend, securing a 2-1 win at Goodison Park in arguably the club’s best performance of the season so far.

Sean Dyche’s side were good value for the three points and dominated the midfield battle, with Ashley Westwood thriving alongside Josh Brownhill in an industrious and combative display.

Burnley’s performance showed the rewards that can be reaped from playing a more expansive brand of football, the Clarets pressing high and aggressively with their midfield duo at the forefront of their success in winning turnovers.

Westwood’s signature mix of tenacity and energy was complimented by his confidence in possession, the 30-year-old’s intelligent passing finding its way between Everton’s defensive lines.

Brendan Rodgers deserves huge credit for maintaining Leicester‘s push for the top four despite the wealth of injuries that have decimated his squad in recent months, the Foxes’ strengthening their grip on a Champions League place by thrashing Sheffield United 5-0 on Sunday.

Leicester’s forward options rightly claimed most of the headlines, but flourishing in a deeper quarter-back role was midfielder Youri Tielemans.

Tielemans has been hugely impressive this season and in the Belgium international and Wilfred Ndidi the Foxes have one of the Premier League’s best midfield pairings, the latter’s brilliant work out of possession complimented by the composure and passing range of his midfield partner.

Tielemans was excellent as the bottom side were thrashed at the King Power Stadium, picking up the ball deep and sliding passes through lines and into the feet of Leicester’s attacking trio.

Stationed out on the right in our Team of the Week with a licence to drift inside, Ayoze Perez impressed on his return to the Leicester side this weekend as he was given freedom to create opportunities behind the Foxes’ forwards.

The Spaniard was a constant goal threat throughout and netted his second of the season in fine style, a sweet strike from just outside the penalty area for his third goal in three appearances against Sheffield United, who must surely be sick of the sight of him.

Remarkably, the Blades are the only side the forward has scored against in the Premier League since February 2020, and Perez will hope he can build on this weekend’s performance as he bids to earn a regular place in Brendan Rodgers’ side.

His influence in a second half that Leicester dominated will have been pleasing for his watching manager, the 27-year-old always available for passes from deep and providing a creative spark in the absence of James Maddison and Harvey Barnes.

A brilliant performance from a talented young footballer. McNeil was exceptional in possession and tireless without it as the winger starred during Burnley’s 2-1 win at Everton.

The 21-year-old’s development has gone somewhat under the radar given Burnley’s inconsistent form this season but this was a reminder of his talent and potential.

McNeil worked his socks off defensively for Sean Dyche’s side and produced a moment of magic to decide the game, a brilliant feint and curling finish that nestled beautifully into the top corner.

Adding regular goals to his game will help take McNeil to the next level with his stunning strike at Goodison Park only his second of the campaign, though the Premier League’s biggest sides are likely to be monitoring the progress of a player who could soon outgrow his current surroundings.

Iheanacho has seized the chance afforded to him by Leicester’s injury woes and the shirt now appears his to lose following a masterclass in finishing at the King Power Stadium on Sunday.

The Nigerian international turned home two first-time finishes from Jamie Vardy crosses to put the home side in control, before confidently lashing home a third from just outside the penalty area to complete his hat-trick.

This was the sort of performance many expected to be a regular occurrence following the forward’s breakthrough as a youngster at Manchester City, and provided a reminder of the forward’s finishing ability when afforded an opportunity.

50 – Kelechi Iheanacho has been directly involved in 50 goals in 76 starts across Leicester and Manchester City, scoring 36 and providing 14 assists. Product. pic.twitter.com/QeeK22zwlf

It’s now six goals in just eight league starts for Iheanacho this season, and with seven-goal involvements (three goals, four assists) in seven Europa League games too, it is turning out to be his most productive season yet since signing for Leicester in 2017.

Jamie Vardy’s goalscoring drought continued with another blank against Sheffield United, last season’s Golden Boot winner having now netted just once in his past 12 league appearances.

Vardy’s clinical touch may have deserted him once more as he squandered several chances, but this was an electric display from the Foxes forward whose speed and movement caused the visitors no end of problems.

The 34-year-old stretched the Sheffield United defence and dragged their centre-backs out of position, whilst he showed his ability to create with two first-time crosses that were tucked away by strike partner Kelechi Iheanacho.

Another cross-shot from Vardy also saw Ethan Ampadu turn into his own net as Leicester ran riot in the second half, with the forward now the club’s leading goalscorer and assist provider in the Premier League era.

Vardy may be approaching the twilight of an incredible career, but he remains as crucial to Leicester as he has ever been.