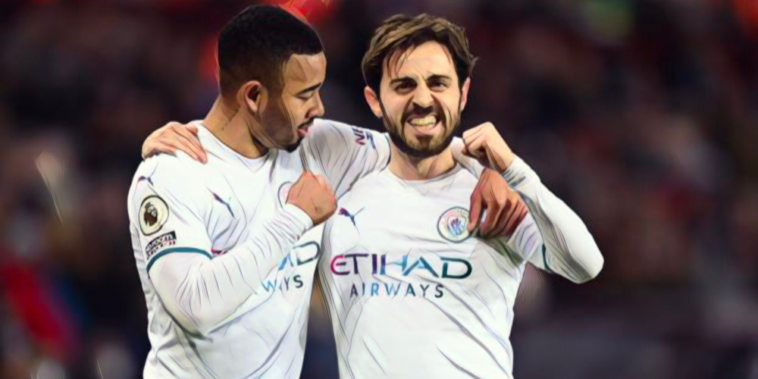 Steven Gerrard’s winning start as Aston Villa boss came to an end as a Bernardo Silva stunner fired Manchester City to a 2-1 victory on Wednesday night.

The champions made a typically dominant start to proceedings at Villa Park with Emi Martinez forced into a handful of early saves to deny both Joao Cancelo and Rodri, albeit with the hosts posing a notable threat on the counter.

After a frantic, end-to-end start to the game, it was Man City who inevitably struck first courtesy of unlikely scorer Ruben Dias, the Portuguese defender firing in on his weaker foot from just outside the box after good work from Raheem Sterling down the left flank.

That lead was then extended just before the interval through Dias’ fellow countryman Silva, the midfield maestro latching onto Gabriel Jesus’ dinked cross and expertly volleying past a helpless Martinez to round off a blistering counter.

To their credit, the home side responded well after the interval and ensured it would be no comfortable, second-half stroll for Pep Guardiola’s side, as the ever-dangerous Watkins flicked in at the near post from a well-worked corner just under two minutes after the restart.

That strike gave the home side renewed hope of a potential fightback, although they struggled to create much in the way of clear cut chances, notably seeing an effort from substitute Carney Chukwuemeka denied by the ever-reliable Ederson.

As it was, City managed to fend off any potential late onslaught to secure a hard-earned victory, as Jack Grealish made a winning return to his former surroundings following his £100m summer move, the Englishman receiving a mixed reception after entering the fray late on.

Speaking after the match, Guardiola was left delighted to have secured all three points, as his side moved to within just a point of leaders Chelsea.

“The game we played was fantastic,” he told Amazon Prime Sport. “Difficult game. We knew it. I understand why. Especially after conceding early in the second half, the way we reacted… we played really well.”

The game’s standout moment was of course the stunning strike from the in-form Bernardo Silva, a player that the City boss believes is currently ‘on another level’ after an impressive campaign thus far.

“He scored a fantastic goal,” he said. “Depends on him. when a player has this quality it depends on them. He is a player on another level. Ruben has good personalities. He scored a good goal.”

The win was all the more enjoyable for the champions amid their current selection woes – the likes of Kevin De Bruyne and Phil Foden having been absent in recent weeks – although Guardiola was unsure when his stricken players would be free to return to action.

“I don’t know,” he admitted. “Hopefully they come back soon. The doctor came to me and say ‘this guy, this guy and this guy can’t travel’ so I say ‘OK. Bring players from the academy and we go with them.'”

Asked whether they are ready for the title challenge, Guardiola replied: “Do we have another alternative? So we are going to face the challenge.”

Manchester City are next in action away at Watford on Saturday evening.

Read: The longest waits for a win at the start of a Premier League season