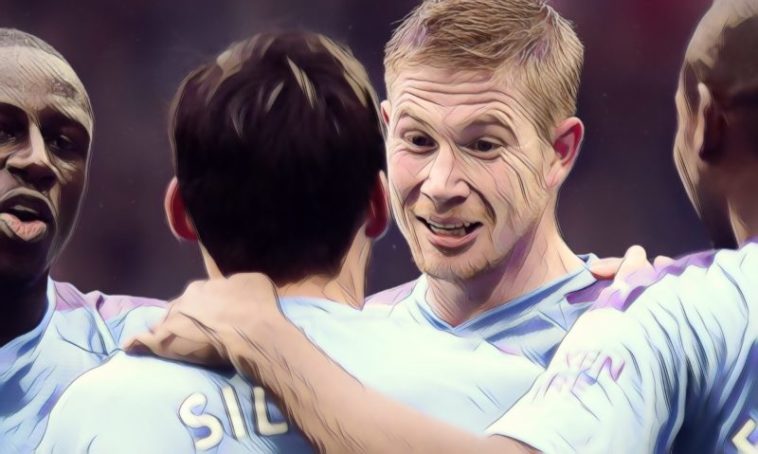 As expected the reigning Premier League champions dominated possession right from the off, but they struggled to create many clear cut chances against a well organised and resolute Villa outfit.

However, once red-hot attacker Raheem Sterling finished past Tom Heaton just a minute after the half time break, City began to produce the type of incisive attacking football that has been their hallmark under Pep Guardiola.

City’s second would be a bizarre strike that will once again see the use of VAR hotly debated after a Kevin De Bruyne cross was adjudged to have gone straight in, without being touched by David Silva or the offside Raheem Sterling.

Both sets of fans were hugely upset that it took VAR four minutes to come to a decision, which has now been challenged after the independent goal accreditation panel gave the goal to Silva post match.

?? Kevin de Bruyne says he won’t be claiming his ‘goal’ this afternoon!

German midfielder Ilkay Gundogan then sealed what turned out to be a comfortable win for the home side on 70 minutes with a tidy first-time finish.

Today’s win was not without its down point though, with the influential Fernandinho sent off for two bookable offences, further adding to Guardiola’s defensive injury crisis.

Speaking after the game, Guardiola conceded that his side had struggled during the opening 45 minutes, but he was full of praise for his team’s second-half display.

“Aston Villa played very well in the first half and we played not so good,” Guardiola told BBC Sport.

”They are newly promoted and played with real spirit, attacking the channels well.

Read: Five shock transfers that made us fall off our chairs