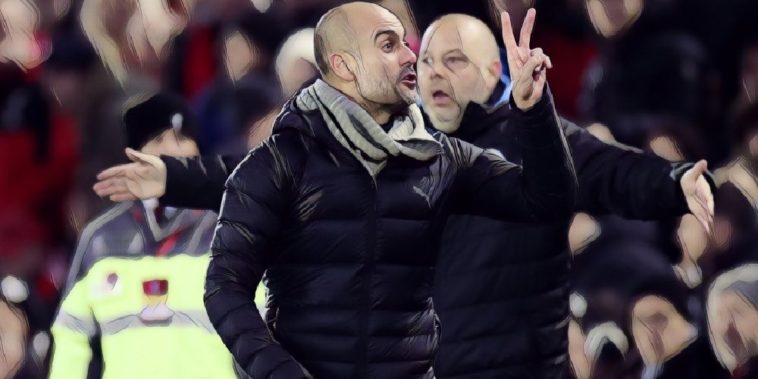 Pep Guardiola has insisted he was ‘proud’ of his side despite being put to the sword by Liverpool, the league leaders earning a valuable 3-1 win at Anfield.

It was a game that was full of action from the off, with Man City quickly settling into the game with their usual slick passing style. The visitors had a strong shout for a penalty turned down, replays showing Trent Alexander-Arnold to have clearly handled the ball inside his own area, only for Michael Oliver to wave away City appeals, though Bernardo Silva also appeared to handle it in the same incident.

The visitors’ frustrations were quickly compounded following a swift counter-attack, Guardiola’s side failing to clear their lines sufficiently, only for Liverpool midfielder Fabinho to fire home an absolute thunderbolt home from 25 yards in what was a frenetic start. VAR took a look, but the goal was allowed to stand, and the penalty decision upheld.

Another back-post header made it three in the second-half, notorious diver Sadio Mane diving in at the back post to finish off a splendid cross from Jordan Henderson.

City had plenty of chances throughout the evening, but their usual clinical nature in front of goal deserted them, Sergio Aguero missing a whole host of opportunities to score his first Anfield goal.

Bernardo Silva did squeeze one in for the reigning champions late-on but it would serve as no more than a consolation, Liverpool holding on for a famous win to move eight points clear at the top of the table.

Despite the damaging result, Guardiola insisted he was pleased with the performance of his side.

“Congratulations to Liverpool, they scored three, we got one but I’m so proud of my team,” Guardiola told the BBC. “Few teams can come here and play the way that we did.

“We started incredibly well, we showed incredible bravery, they are the champions of Europe of and it is the most difficult stadium in the world. They had two shots and it was two goals.

“It’s not easy after being two goals down to react the way we reacted. It was one of the best performances I have ever seen from my team. That’s what we needed and hopefully we can continue to make the steps we need.”

Guardiola was visibly furious on the touchline following Michael Oliver’s decision to not to award City a penalty, the Catalan also thanking the referee at the final whistle with more than a touch of sarcasm.

However, when asked about the decision not to award his side a penalty in the buildup to Liverpool’s opener, the former Barcelona boss decided not to risk censure, simply saying: “Ask Mike Riley and his people please.”

The result moves Liverpool eight points clear of Leicester and Chelsea in second and third, while Man City are a point further back in fourth.