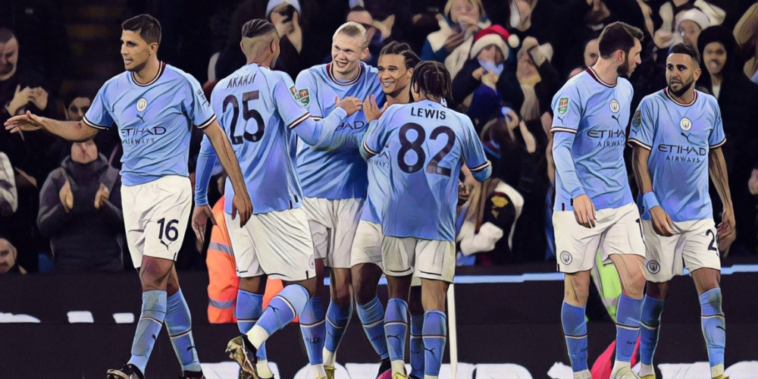 City were the better side in an entertaining 3-2 win at the Etihad, a fixture which saw Liverpool twice fight back to level before Nathan Ake headed home a winner.

Erling Haaland had opened the scoring with his 24th goal of the season in all competitions, but Liverpool were level before the break as Fabio Carvalho capped a fine move. The second half began with goals as Riyad Mahrez put City back in front, but the visitors equalised less than a minute later through Mohamed Salah.

Ake’s winner booked City a quarter-final date with Southampton and Guardiola was pleased with the performance from his side, singling out academy graduates Cole Palmer and Rico Lewis for praise.

“After the World Cup and a long time without playing, both teams played at an incredibly high level of intensity,” he told Sky Sports. “Liverpool are so difficult, when they play good, they can destroy you.

“It was a good game and an entertaining game. A big compliment to the players for how they played.

“Kevin de Bruyne played with fire inside of him. How many years has he been here? Seven or eight years? He is an absolute legend and always I push him to find that fire.

“Cole Palmer played really well, especially in the first half. The way Rico Lewis played against Liverpool, with the stars they have up front, we are incredibly lucky to have this player for the next decade. Hopefully the club can take him. The game he played was exceptional.”