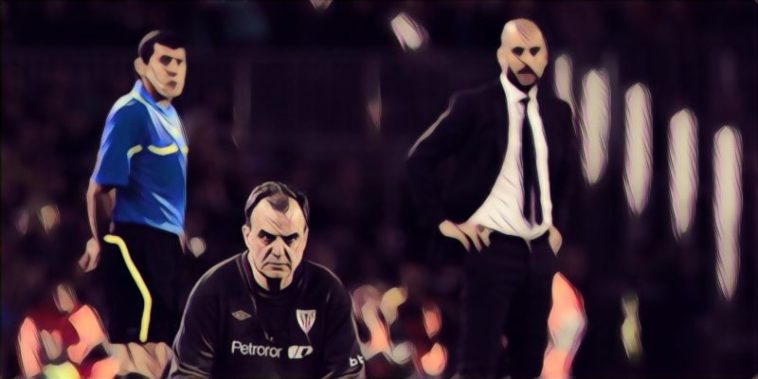 Pep Guardiola has described Leeds boss Marcelo Bielsa as a ‘gift’ to have in the Premier League ahead of Manchester City’s trip to Elland Road this weekend.

This weekend will see Guardiola face off against a man who has had a huge influence on his career, the City boss having spent time studying Bielsa and his methods before stepping into management.

The two have maintained a close relationship ever since and Guardiola has often eulogised about the Argentine tactician, who has enjoyed spells with the likes of Athletic Bilbao and Marseille before moving to English football.

Bielsa’s reputation as an influential coaching figure has come through his unique and innovative approach to the game, with Guardiola believing the Premier League are fortunate to have ‘the most authentic manager of all time’ amongst their ranks at present.

”Cruyff was the most influential (to me) because I was four years with him and when I started as a manager he was an incredible help, but Marcelo, he is the person in world football I admire the most,”

“I think he is the most authentic manager all the time in terms of how he conducts his teams, he is unique.”

”My theory is the manager is not about the titles because I feel far away from his knowledge. My teams won more titles than his, but in terms of knowledge of the game, I am away from him.

”It is a good present, a good gift to have him in the Premier League.

Bielsa surprisingly took charge of second tier Leeds two years ago before leading the club back to the Premier League following a 16-year absence, the club’s uber-attacking and high intensity style having already won plaudits with eight goals scored in their first three fixtures.

It will be the first time Guardiola has faced a Bielsa side in eight years and he is expecting a difficult challenge once more, the newly-promoted side quickly showing they are ready to compete in the top flight.

Asked what he expects from Leeds this weekend, Guardiola added: “They do exactly what they have to do. They are a team, fight for each other, defend a lot around the box.

”They have good build up. At the right moment, they arrive with a lot of players.

”I played three times against Marcelo at Bilbao, and every game was so difficult.”

Read Also – Is Frank at fault? Why Lampard needs to look in the mirror when it comes to Chelsea’s deficiencies